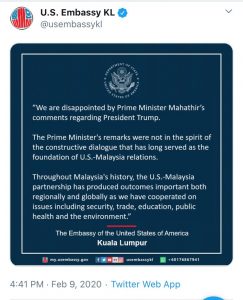 This statement was released via the embassy’s social media platform Twitter @usembassykl this evening after the Prime Minister of Malaysia offered a short advice to US President Donald Trump yesterday at the Third Conference of the League of Parliamentarians for Al-Quds.

“The Prime Minister’s remarks were not int the spirit of the constructive dialogue that has long served as the foundation of U.S – Malaysia relation.”, the Embassy wrote.