PETALING JAYA: A cloud of dust fills the air as a local film crew brushes the soot and cobwebs off their cameras for the first time in nearly three months.

Like many production houses, Radius One – responsible for churning out popular Malay-language dramas like Nur, Nur 2 and Adellea Sofea in the past – had to halt its production on a number of local serials when the movement control order (MCO) came into effect on March 18.

But it’s not business as usual, as production houses are given a long list of guidelines to adhere to ensure the safety of their cast and crew.

“We will not compromise on safety, ” Hisham A. Karim, an executive producer at Radius One who oversees the day-to-day operations of a TV set, pledges.

“Whatever we can do to prevent Covid-19, we will do it to the best of our abilities.”

So what are these new SOPs and how has the filming process changed as a result of it?

StarLifestyle checks in on a local TV set in its first week back on the job.

Perhaps the biggest game-changing SOP outlined by the government is limiting the cast and crew to only 20 people on set at any given time. And not only is physical contact prohibited, they must stand more than 1m apart.

The guideline inevitably has had an effect on the filming process, down to the very essence of what makes a TV show – its script.

“I try not to write scenes which have very big groups of people in them, ” says scriptwriter Shahrulezad Mohameddin, who is best known for writing the groundbreaking 2018 drama Nur.

“I also have to think about where I set a scene. I have to avoid small spaces because that would make social distancing difficult.”

Shahrulezad, who is also the founder of Radius One, was working on two serials Dendam Cinta Arissa and Aku Yang Merinduimu when the ban came into effect.

Shahrulezad has the uphill task of adapting the scripts to the new SOP while maintaining their original tone and storyline.

“Fortunately, there aren’t many big changes for us, ” he offers, adding the biggest change he has made so far is finding a way to remove large group of extras that some scenes initially called for in both dramas.

Limiting the amount of characters in a scene is one thing, but making sure they have no physical contact with each other is another thing altogether.

However, Shahrulezad says this isn’t much of an issue as Malay romance dramas are prohibited from portraying physical intimacy to begin with anyway.

“Even before the pandemic, the film censorship board of Malaysia (LPF) is quite strict as it is. Things like kissing or holding hands, we don’t do that.”

He adds that fight scenes, which typically involves some physical contact, can still work with the help of a director who can perform camera tricks.

Asked if the Covid-19 pandemic itself would be incorporated into the script of an upcoming drama, Shahrulezad shares he has no plans to do so.

“We want our dramas to be evergreen. Some of our dramas get aired again after its original premiere date, and that could be way after the pandemic. We still want them to be relevant then.”

Writing off non-essential characters will definitely help reduce the amount of people on set. But on a typical day, the production team alone may exceed the 20-pax ordered by the government.

Hisham – who has 17 years of experience assembling the various moving parts of a TV production (hair and makeup, props, lighting and so forth) and making sure they run smoothly – has his work cut out for him.

The executive producer is currently working with Shahrulezad on Aku Yang Merinduimu. (Dendam Cinta Arissa has yet to resume filming). Production companies have invested in thermometers and hand sanitisers for their cast and crew members.

He talks about his efforts to keep the flow of human traffic on set to the bare minimum. “I’ve trimmed down each department. For example, I would have two make-up artists on set usually. I’ve reduced to just one.

“And I would have three people doing props. Now, I only have two. And only one of them is on set. The other person is working on getting materials for the props elsewhere.”

“Then there’s the drivers who help shuttle our cast and crew members. Instead of having them wait around on set, we ask them to go home first and come back later.”

Another SOP the government has ordered is the need for every cast and crew member to disclose four weeks’ worth of travel records prior to filming.

Hisham has taken this directive one step further, making it compulsory for his production team to quarantine themselves before the shoot date.

“We don’t want them to go here and there and then bring the virus to our set. This applies especially to makeup artists and hairdressers who have to come into close contact with actors when doing their jobs.”

Indeed, safety and hygiene is foremost in Hisham’s mind when filming in the midst of a pandemic.

Even before the pandemic, the need for good hygiene is something he impresses upon his production team.

“I make sure the person taking care of the wardrobe never mixes the different actors’ clothes, for example. You wouldn’t like it if your clothes get mixed up with someone else’s right? So clothes that have been worn have to be put separately or zipped up.”

With Covid-19, Hisham invested in a machine that sterilises clothes to amp up hygiene.

The actors’ clothes must be cleaned and stored properly before and after use, to curb the spread of Covid-19.

When it comes to makeup, the government requires makeup artists to wear face shields besides washing their hands regularly.

Despite that, Hisham understands that some actors are more comfortable with getting ready on their own.

“There are a few ways to go about it. Some talents may choose to do their makeup entirely on their own and that’s fine as long as the director approves the look.

“Another option is the talent may choose to apply a base makeup at home first. Then on set, the makeup artist will do the rest. This means they’ll spend less time on the makeup chair.”

Hisham adds, so far, none of his actors have refused to return to work.

“They’ve worked with us and they know our safety standards. Even before the pandemic, if a cast falls sick, we won’t force them to shoot. We can always shoot another day.”

As per the government’s request for a safety supervisor to be present on set, Hisham has hired a medical company who has been working closely with the ministry of health. The supervisor conducts temperature screenings and ensures the production team complies with the various SOPs.

Hisham is committed to taking these safety precautions, even if it means eating into their production budget.

“Usually, the miscellaneous cost incurred per day is estimated at RM150. With these extra expenses, I’m looking at an extra RM50 per day on average, ” he estimates.

The outlook on TV

Television stations are not a part of the production process of scripted dramas. They merely commission them to production houses and air them once they’re ready.

But TV stations like Astro are doing what they can to help production houses get back on their feet, sharing they are open to revising the budget to meet the potential rise in production costs due to the pandemic.

“Should more cost be incurred, we are open to discussion, ” the head of Astro Malay channels, Raqim Ahmad, offers. 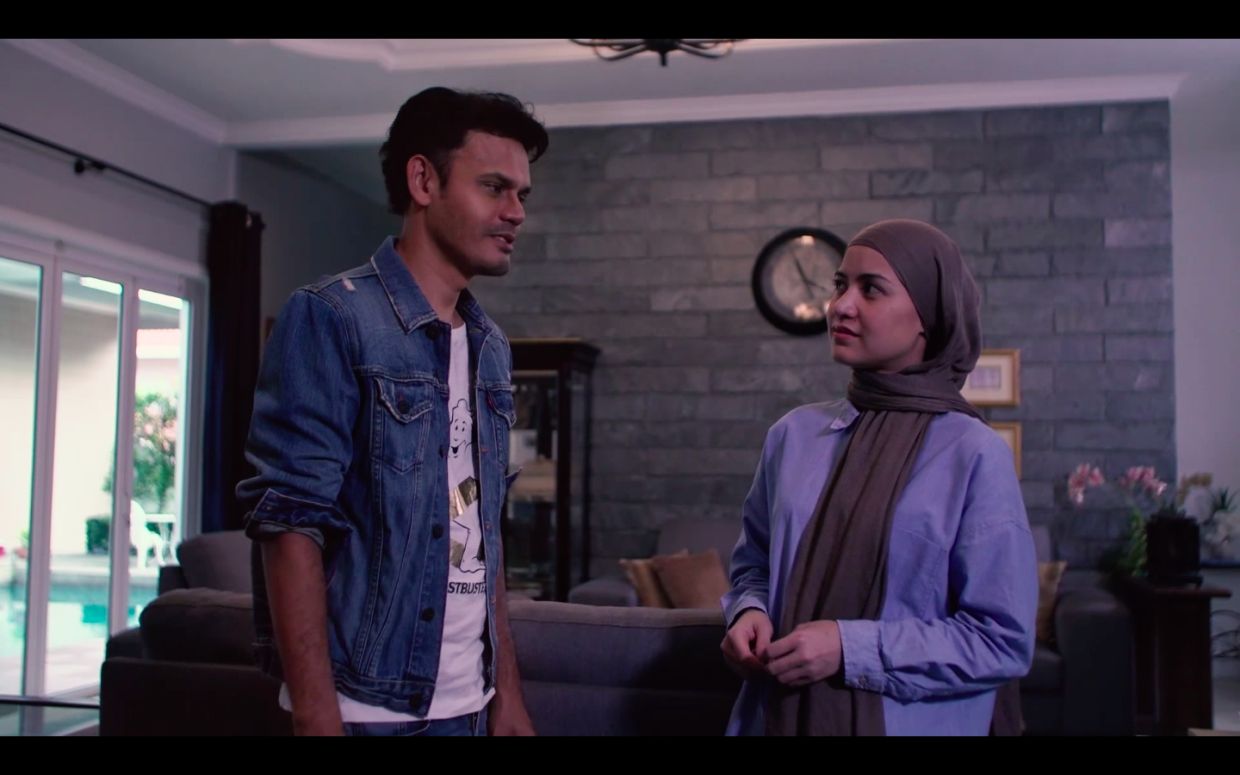 However, so far, most production houses have been able to work with the agreed upon budget before the pandemic, he adds.

“Perhaps due to a smaller production crew and limited filming locations, even with the extra expenses spent on Covid-19 safety measures, it all amounts to more or less the same, ” he reasons.

Raqim says Astro is also aware that it may take production houses a longer duration to shoot an episode now as following Covid-19 safety measures inevitably takes up more time.

“An episode typically takes two to three days to film. We are anticipating that it will take an extra half a day now. We understand this and are prepared to extend their deadlines.”

Like many industries, Covid-19 caught TV stations by surprise initially, leaving them with no choice but to air reruns. But as this new reality sinks in, they’ve been able to adapt rather quickly.

Case in point: During an earlier phase of the MCO, Astro engaged actress Lisa Surihani and her husband, renowned director-producer and co-founder of KRU Studios Yusry Abdul Halim, to make an entire film from start to finish at home.

“We acted, directed, shot, edited – we did it all at home, ” says Yusry in a promotional video for telemovie 6 Hari that was also recorded, you’ve guessed it, at home.

“The quality of the film was really good actually. We were very impressed by it, ” Raqim enthuses about the telemovie, which premiered early this month.

This quick-footed response can also be seen on unscripted shows. Astro, which has an in-house production team dedicated to churning out reality shows (besides recruiting external production teams), found ways to record fresh episodes including the Raya edition of Dansa Dan Sing and Muzikal Lawak Superstar.

During the MCO, reality talent shows stayed on air by having contestants dial in remotely.

“We delivered some basic filming equipment to each of the contestant’s houses. So not only did they have to be the person in front of the camera, they had to set up the camera, the backdrop and so forth by themselves. And they really rose to the challenge.”

While the country has entered the recovery MCO phase, the future is still uncertain. Raqim says Astro is preparing for all possibilities, including the return to the initial stricter phase of MCO should there be a spike in Covid-19 cases.

“Not only are we looking into producing shows to fill our regular programming slate, we have to shoot additional shows as backup, in case we are not allowed to film again, ” Raqim says.

Asked if he fears there will be a drop in the quality of local scripted dramas due to the various restrictions, Raqim rubbishes the notion.

“From the work I’ve seen so far, like Lisa and Yusry’s telemovie, I know that we have very talented people in our industry who are able to work around the restrictions.”

Shafie: Those from active Covid-19 states will be barred from entering Sabah