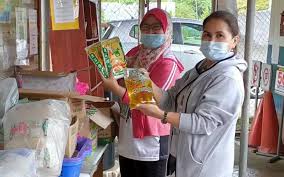 KOTA KINABALU: A food bank started by a primary school to feed students from low income families affected by the Covid-19 pandemic has turned out to be immensely popular.

SK St Peter in Sabah’s northernmost Kudat district began this initiative in October by placing daily necessities such as rice, flour and milk on a school cabinet-turned-food rack.

The rack was placed just outside the school near the guard house to enable students or their families to easily pick up the food items.

“We thought of the initiative as a way to help our students and their families who were badly affected by the pandemic, but later we just placed the rack outside for anyone to take what they needed,” headmaster Pauline Gusup told FMT.

Many of the students come from poor families who have been badly affected by the pandemic and movement restrictions.

The school is located just a stone’s throw away from the sea and is surrounded by housing areas and is close to several villages, including three settlements in Kudat placed under enhanced movement control order (EMCO) since Oct 30.

“We started by just placing five sets of food items in the morning but these would quickly run out even before 3pm, so we would have to restock the food by then.

“We were inspired by other schools which were providing free food like bread or nasi lemak, but the difference is that we are providing dry goods instead of ready-to-eat food,” she said.

The programme, which Gusup and one of the school’s teachers, Nurul Huda Mostapa, thought of was brought to life after they managed to pool RM200 from among the teachers to buy the food items.

Gusup then appointed Nurul Huda as the food bank coordinator and gave her permission to post about the initiative on social media.

“This quickly became viral and led to more donations and contributions from other individuals and agencies outside the school. It enabled us to buy more food to help the needy,” Gusup said.

By the time the programme was fully running, it had become a full-fledged school project. “I told my staff that we don’t have to wait until we’re rich to help people.

“I also borrowed these words to motivate them: ‘When we see the poor are tested because they have no food, it actually means we are being tested ourselves to help them’.

“So, this is our own small way to help the people as much as we can. We will continue with this food bank as long as there are contributions,” she said, adding the public could also contribute food and money.

Nurul Huda said many of their students had parents, who had depended on daily wages, were involved in small-time businesses or were just village fishermen, had suffered a loss of income.

“They were only making ends meet before the movement restrictions were enforced. That’s why we are so privileged to have been given this opportunity to help these people,” she said.

Nurul Huda said Gusup also made it a point for the school to utilise the funds to provide food baskets to poor students and their families who might not have benefited directly from the food bank.

She said teachers had sought out as many underprivileged families as they could and reached out to them to deliver the assistance under the second part of their project.

But now their second phase, which is to deliver food baskets to targeted groups, has been somewhat disrupted as the three villages in their vicinity -ly Kampung Pangaraban, Kampung Tanjung Kapor and Kampung Landung Ayang – are under EMCO.

Thinking back, Nurul Huda said that at one point during the early days of the project, she feared everything would come to a premature end after the money almost ran out.

“I was worried because I only had RM19 left after buying the food stuff … what could we do with only that amount?”

But, thanks to contributions from teachers, friends, agencies and other individuals, including politicians, she said they could now extend the food bank until the middle of the month.

“We never thought we could have done this for such a long period, and this is due to the many kind donations for which we are grateful,” she said.