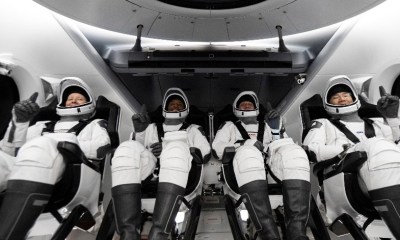 WASHINGTON: The SpaceX “Resilience” Crew Dragon manned mission to the International Space Station (ISS) has launched from the Kennedy Space Centre in Florida, reported Sputnik news agency according to the National Aeronautics and Space Administration (NASA).

“The Crew-1 mission has lifted off on a Falcon 9 rocket from @NASAKennedy at 7.27 pm ET [00:27 GMT on Monday, November 16] and is en route to the @Space_Station,” NASA said on Twitter, where a live broadcast is underway.

Later, NASA said that the rocket’s Stage 1 had separated and that the Crew Dragon space vehicle was “on its way.”

The launch of the first-ever operational commercial crew mission follows the SpaceX Demo-2 mission that took NASA astronauts Bob Behnken and Doug Hurley to the ISS in May this year.

The SpaceX Crew-1 mission is carrying United States astronauts — Mike Hopkins, Victor Glover and Shannon Walker — and Soichi Noguchi from Japan for a six-month stay on the ISS.

According to NASA Administrator Jim Bridenstine, the first stage of the Falcon 9 rocket will be reused for the SpaceX Crew-2 mission that is expected to be launched in March 2021.