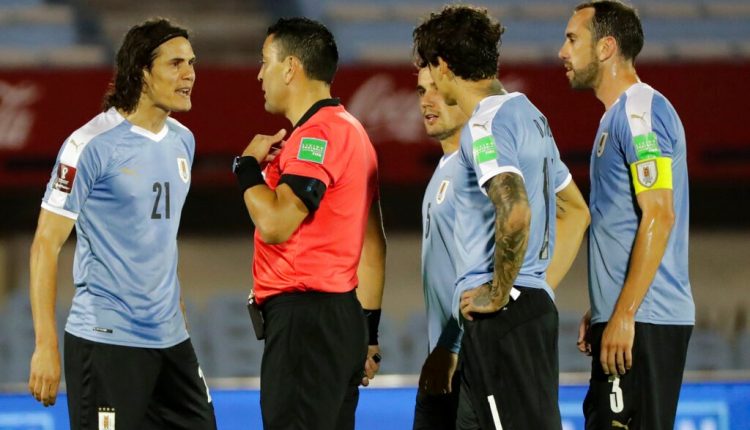 MONTEVIDEO: Brazil continued their perfect start to the qualifiers for the 2022 World Cup with a 2-0 win over Uruguay while rivals Argentina stayed in touch with an easy win in Peru.

First-half goals from Arthur and Richarlison helped Brazil to a 2-0 win over Uruguay, who had Manchester United striker Edinson Cavani sent off.

Argentina, with Lionel Messi pulling the strings, brushed aside a limited Peru 2-0 in Lima, with goals from Inter Milan’s Lautaro Martinez and Nicholas Gonzalez in a game in which they were never troubled.

Ecuador, playing on their home turf in high-altitude Quito, hammered Colombia 6-1. Paraguay and Bolivia fought out a 2-2 draw while Venezuela — the only South American team never to qualify for a World Cup finals — picked up their first points in a 2-1 victory over Chile in Caracas.

Victory in Montevideo left Brazil on top of South America’s qualifying standings on 12 points with four wins from four games. Argentina are second on 10 points after beating Peru, with surprise team Ecuador third on nine points.

Uruguay are fifth on six points, behind Paraguay on goal difference after four matches.

The first four teams in South America’s round-robin competition qualify directly for the World Cup finals in Qatar, while the 5th placed nation faces a playoff against the country qualifying from Oceania.

Five-time world champions Brazil were fortunate to be two goals up at half time in Montevideo after Uruguay had hit the woodwork twice at either end of the half.

The win also extended Brazil’s long reign of dominance over the Celeste, who have not beaten their fierce rivals since 2001.

Cavani’s sending off with 20 minutes to go capped a miserable night for his side, despite having the better of things for much of the first half.

Chilean referee Roberto Tobar showed him a yellow card after his lunge caught Richarlison on the ankle. But after a VAR check, that changed to red, leaving Cavani incredulous, and he left the pitch reluctantly.

Brazil almost drew first blood after two minutes of a lively opening, when Uruguay keeper Martin Campana parried a close range shot from Gabriel Jesus after the Manchester City striker bought a yard of space on the edge of the six-yard box.

Uruguay fashioned another gilt-edged chance when Nathan Nandez’s cross from the right was headed over by Cavani.

Brazil had most of the ball, but could find no way through a well-marshalled Uruguay midfield.

They finally broke through however with their first real chance in half an hour, and with a large slice of luck.

Feeding on a slick lay-off from Gabriel Jesus, Arthur’s shot from outside the area took a wicked deflection off the back of Uruguay defender Jose Gimenez, wrong-footing the luckless Campana, who could only watch it bounce into the net.

Two minutes later, a slick through ball from the Juventus forward put Liverpool’s Roberto Firmino in on goal but his left foot shot lacked the power to beat Campana.

Brazil gradually got on top on midfield as the half wore on, and struck a body blow to Uruguay’s hopes of a revival when Everton striker Richarlison headed in a long cross from Renan Lodi out on the left, to score his 8th goal for Brazil.

It was a cruel blow just before half time, emphasised when Uruguay skipper Diego Godin powered a header against the Brazil bar from a free-kick by De La Cruz.

Showing slickness on the ball, Brazil began to cruise in the second half, even without the injured Neymar.

Uruguay missed the physical presence of Luis Suarez, out with a positive Covid-19 test, and Brazil centre halves Thiago Silva and Marquinhos had the better of a sometimes tasty encounter with their former Paris St Germain teammate Cavani.