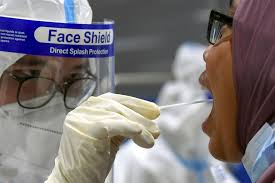 KUALA LUMPUR, Nov 19 — The level of concern shown by Malaysians on COVID-19 is well above the global average, according to findings by a global market research company Ipsos.

In a statement, it said in comparison, countries hard-hit by the pandemic in Europe and the Americas have lower levels of concern than in Malaysia as 77 per cent of Malaysians have been polled worried about COVID-19 as at Oct 20.

According to Ipsos, 44 per cent of the rest of the world is concerned about the pandemic, and Great Britain is second to Malaysia with 61 per cent, followed by Spain (60 per cent) and South Korea (58 per cent).

Ipsos mentioned that the survey is conducted monthly in 28 countries around the world via the Ipsos Online Panel System in which Malaysia’s monthly sample is n=500.

The research also found that with a sharp resurgence in COVID-19 cases recently, Malaysians increasingly feel the country is on the wrong track, from 33 per cent in September to 40 per cent in October, while those who feel that the country is heading in the right direction dropped from 67 per cent to 60 per cent for the same period.

However, Ipsos stated that the findings of their research also showed unemployment has remained consistent as a key concern throughout the pandemic period in Malaysia in which statistics showed 43 per cent in April, 51 per cent (July) and 48 per cent (October). – BERNAMA