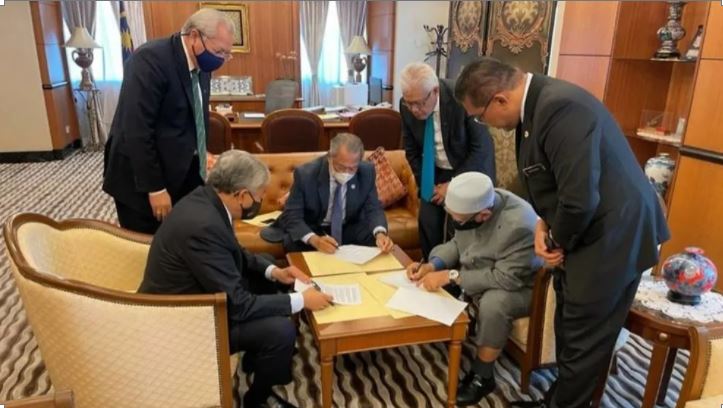 IPOH, Perak: The political crisis in the Perak state assembly appeared to have been solved on Wednesday (Dec 9) with an agreement to nominate an assemblyman from United Malays National Organisation (UMNO) to be the next chief minister.

A joint statement on the matter was released by the secretaries-general of Barisan Nasional (BN), Parti Pribumi Bersatu Malaysia (Bersatu) and Parti Islam Se-Malaysia (PAS).

“Based on the spirit of Perikatan Nasional consensus, the three parties have agreed to recommend Saarani Mohamad as the new chief minister of Perak, to be presented to the Sultan of Perak,” the statement said.

Mr Saarani is Perak UMNO chief. UMNO is a key component party of the BN coalition.

The chief minister’s post was left vacant when Mr Ahmad Faizal Azumu from Bersatu resigned after losing a motion of confidence last Friday in the state legislative assembly by a vote of 48-10, with one spoilt vote.

The motion was tabled by an assemblyman from UMNO.

Presently, UMNO has the largest share in the state assembly with 25 seats. DAP has 16 seats, Bersatu and Amanah have five seats each while PAS and PKR have three seats each.

The remaining two seats belong to a member of Parti Gerakan Rakyat Malaysia and an independent candidate.

In a bid to resolve the crisis, Malaysian media reported on Tuesday that Perak ruler Sultan Nazrin Muizzuddin Shah had summoned representatives from the political parties for an audience.

It was said that following the meetings, the ruler was unable to ascertain which assemblyman commands the majority to be the chief minister.

According to the joint statement on Wednesday, Ahmad Zahid Hamidi, who is UMNO president and BN chairman, offered his apologies over the “mistake” of BN assemblymen.

“During the discussion, Barisan Nasional chairman apologised on behalf of BN assemblymen for their mistake,” it read.

The meeting among the party presidents and secretaries-general on Wednesday also led to a consensus for the remaining appointments in the state government, the statement added.

“The three parties together agreed to strengthen cooperation between parties in the Perikatan Nasional government in Perak and also at the national level for political stability and people’s well-being,” it said.

Bersatu, UMNO and PAS are allies at the national level, having worked together to replace PH as the federal government in March.

The fall of the PH federal government had then led to the collapse of the Perak PH state government as well. Mr Ahmad Faisal resigned as chief minister on Mar 10, and was reappointed to the post several days later to form a new state government with UMNO and PAS.

After Mr Ahmad Faizal was ousted last week, Bersatu said it regretted the motion of confidence, which was tabled by UMNO but “was not supported by UMNO”.

“Following this, the supreme leadership council has unanimously agreed to strengthen cooperation between Bersatu and PAS through Perikatan Nasional in the efforts to maintain political stability in national and state levels,” said Bersatu secretary-general Hamzah Zainudin in a statement on Monday.