Malls in Malaysia decked out for the festive season as COVID-19 curbs ease, crowds return 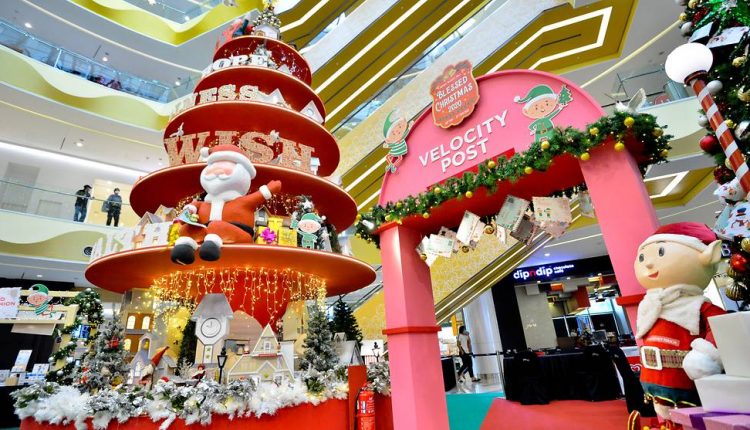 KUALA LUMPUR: With familiar Christmas pop tunes and carols playing in the background, masked shoppers lined up to take selfies in front of the themed decorations at the main concourse area of 1 Utama Shopping centre, a popular mall in Petaling Jaya, Selangor.

Themed “Christmas Is Gnoming”, the mall is decorated to look like a Christmas village with treehouses and cottages in the shape of mushroom and pumpkin, where 24 gnomes live.

“The idea was that we wanted to do something that had a link to the troubles we have overcome throughout this year, and gnomes in Western folklore, as helpful and lucky beings, was something we felt was quite fitting,” 1 Utama’s visual merchandising manager Jefreey Jaafar said.

With a global health crisis halting business and travel, this has been a particularly challenging year for those in the retail industry.

A lockdown imposed earlier in Malaysia saw shopping malls – usually bustling with families and friends spending leisurely time together – go dim and quiet. From Mar 18 to May 4, all non-essential retailers stopped operating, except for supermarkets and food and beverage businesses.

While retailers were later allowed to operate with strict standard operating procedures (SOPs) in place, subsequent detection of COVID-19 cases in malls have kept most shoppers at bay.

1 Utama, for instance, became a cluster after a security guard tested positive. This resulted in the mall being shut for a week in October to deep clean and test around 6,000 workers, tenants and shoppers.

Several festivals, such as Hari Raya Aidilfitri, Deepavali and the Mooncake Festival, came and went as the crowds stayed away.

And then some good news came. On Dec 7, the Malaysian government lifted general inter-state and inter-district travel restrictions imposed to rein in the third wave of infections, just in time for the Christmas and New Year festivities.

Malls in the Klang Valley and beyond are now decked out in their Christmas best, bringing back the cheerful festive mood that has been missing for much of this year.

However, the decorations have been spaced out to ensure physical distancing, while there will be no performances and Santa Claus appearances to prevent crowds from gathering.

Contractors hired to decorate the malls told CNA they were relieved to have the jobs just before the year ends, while malls said they have seen an encouraging hike in the number of shoppers after months of slow business, with people unable to travel internationally.

For Sunway Malls and Theme Parks, foot traffic and sales had normalised between 50 per cent and 60 per cent since the first weekend of December, said its CEO HC Chan.

Although he hoped to see a V-shaped recovery in this final quarter of 2020, he also expected recovery to be slow and gradual in the first half of 2021, as the COVID-19 vaccines are rolled out, and for recovery to reach 90 per cent of normalcy in the second half.

For the festive season, Mr Chan said the malls under his company have chosen a theme related to overcoming the troubles of 2020. Sunway Malls and Theme Parks runs seven locations in three states in West Malaysia.

The theme of “Blessed Christmas” focused on life’s positives, from national solidarity to community and familial closeness in battling the hardships brought on by COVID-19.

“Albeit a challenging year for all, it is equally an inspiring year of selfless acts and courage by ordinary Malaysians.

“The principal difference is that Christmas this year is much more introspective as opposed to previous years of extrospective, it’s about giving thanks and counting our blessings,” Mr Chan said.

In line with the spirit of giving, Sunway Malls is hosting blood donation drives at its locations, with a target of 5,000 donors by the end of 2020.

Sunway said its mall decoration budgets were scaled down due to the need to comply with the new COVID-19 protocols, rather than just financial concerns alone.

At Sunway Velocity Mall in Cheras, Kuala Lumpur, stalls were spread out, and the theme kept close to the traditional North Pole motifs with Santa Claus and elves.

“Decorations are put up with ample physical distancing in mind, hence there is a need to de-concentrate for safety reasons,” said Mr Chan, and the budgetary surplus was instead channelled towards corporate social responsibility efforts to help affected communities.

1 Utama’s senior manager for advertising and promotions Chai Ai Ping also said that the mall has seen a 70 per cent recovery in foot traffic this month, considering its slow numbers in the two previous months due to the COVID-19 cluster.

For Christmas, 1 Utama’s idea was to have decorations as lavish as before.

“We decided we’re not going to cut on anything for the festive season,” said Ms Chai.

“The way we see it, it’s that we need to draw people to come to the mall, it’s our way to help the tenants to draw customers in, after all the troubles we have been through,” she said.

All in all, 1 Utama laid out about RM2 million (US$496,000) for both decorations and a host of gifts and redemptions for shoppers, Ms Chai said.

The decision to proceed with decorations this festive season also means at the least, the designers and decorators who missed out on earlier 2020 festivals due to the lockdowns, got a boost in terms of cash-flow for what has been a mostly disappointing year.

In Penang, Mr Teh Po Cai, one of the directors for Penang-based Visual Art Deco Sdn Bhd, said winning the contract to build the season’s decorations for the Sunway Carnival Mall in Seberang Jaya was a welcome relief.

“At least we have some business, and some cash flow going into next year. The budget was less than last year, but that’s understandable because this year’s economic situation has been bad.

“But we still got orders for large structures and all, because malls need good decorations to draw the crowds, which means business for them and their tenants, and this helps us in turn too,” Mr Teh noted.

In the Klang Valley, Ms Jane Yin, marketing director for JNR Creative Design, who was responsible for fabricating the gnomish structures in 1 Utama’s concourse, said when the Mar 18 movement control order was announced, the feeling was all doom and gloom.

“That was at the beginning. But after that you still have to go on, so you fight on your creativity and pricing, so maybe previously we worked with a few malls, next year we’ll try for more projects,” said Ms Yin.

Setting up the different structures and 14-feet reindeer sculptures at the mall’s main entrance was done up in 10 days.

Mr John Teo, spokesperson for 3 Point 8 Art & Creative, which was contracted for Sunway Velocity’s decorations, said despite the lower decoration budgets, 2020 has been more about survival than profit.

“As long as we can do that, it’s already good,” Mr Teo said.

And like the other contractors, fabrication work is already underway for Chinese New Year.

“Christmas normally takes 6 months because it’s more complex. Detailing, from design till completion, is very important for a good job, and at the end of it, our decorations should evoke feelings that warm the heart and soul,” Mr Teo added.

This year, he added, the decorations are more for “viewing”, unlike previous year when visitors could both view and interact, as malls’ management had to minimise touching for safety and hygiene.

“Decor is also more open, so the whole design thinking has to change and fit with this new normal, but what we strive to do is to bring out the positive, festive feelings through decoration despite this challenges,” Mr Teo said.

One of Mr Teo’s favourite parts for his work at Sunway Velocity is the nearly 10 metre-tall Christmas Tree.

“We also crafted five words – Hope, Joy, Wish, Happiness and Health, to send blessings to everyone over a very tough 2020,” he said.

For the contractors and mall operators, this is also a time to be looking forward to the next big festival – Chinese New Year.

“Actually, at this point in December, we are somewhat late already.

“Take Chinese New Year as an example, the decorations are already designed and fabricated way ahead of the promotion season, because malls have a very short, very fast turnaround time for us to fix up the decor,” Visual Art Deco’s Mr Teh said.For 3 Point 8’s Mr Teo, each festival is something to look forward to.

“We see ourselves not just as designers and fabricators, but also guardians of cultures.”

“We are lucky because we live in a multi-cultural society, every festival is important for us because they tell a different story, and we feel we have the obligation to continue telling those multi-cultural stories, otherwise it will disappear,” Mr Teo said.

No evidence that taxes cause cigarette smuggling, say experts