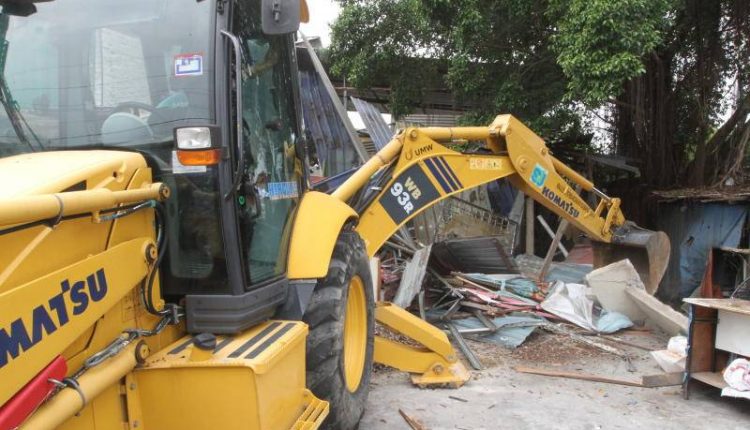 PUCHONG: Selangor Barisan Nasional (BN) chief Noh Omar has dared state menteri besar Amirudin Shari and the Subang Jaya city mayor to meet him for a dialogue over a decision by the local council to demolish hawker stalls in Puchong.

The hawkers and small-time traders along Jalan Taqwa said they had been asked to move to another hawker centre nearby.

They claimed the new centre was not suitable for their needs, saying the 8ft x 8ft lots were too small and lacked the necessary amenities, especially for those selling food.

Speaking to reporters after meeting the traders today, Noh said he was very disappointed over the decision to demolish their stalls now, adding that it was “wrong timing”. He called on the menteri besar and mayor to have a dialogue over the matter on Thursday.

“If you want to take action against the traders, it must be done right. That was my principle when I was the housing and local government minister,” he told reporters after a walkabout in the area today.

He acknowledged the Subang Jaya City Council’s (MBSJ) right to take action against unlicensed hawkers but argued they should not do it at a time when small businesses were facing the negative consequences of movement restriction orders and the Covid-19 pandemic.

“We see today with Covid-19, the federal government has given out millions of ringgit worth of financial assistance for businesse

“The rakyat knows this, so is the Selangor menteri besar deaf or blind? Can’t he see what has happened (to the people)?” he asked.

On the new hawker centre nearby, he said the city council had not considered the views of the traders and hawkers. He said no amenities were provided, with no suitable cooking area for hawkers.

While he welcomed the proposal to upgrade the stalls, he said the council should have planned better.

Khadijah Che Lah, 62, a trader selling women’s accessories, said they were given notices to vacate the premises last year. She said she had been selling items at her stall since 2007, and had a temporary operating license.

She added that the demolition had affected her badly, and that she had suffered more than a 50% loss of income since the pandemic began.

Primawalk Puchong Traders Association president Ismail Awang said the hawkers had no issue with moving to the new lots, but would prefer to remain at their existing locations.

“It’s not that they don’t want to move, but they would like to stay put if possible. We’ve been given licences to operate there, but why did they suddenly want to expand the road? There was no issue before this,” he said.- FMT

Finas has done its part, look at the results, says Ahmad Idham