A day to remember our heroes 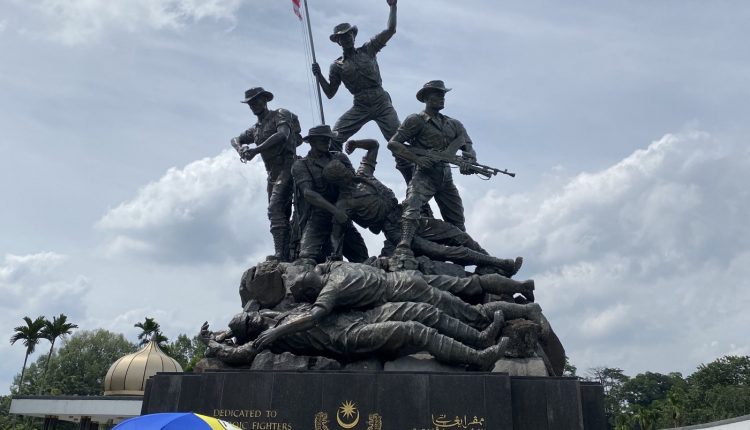 It began with the trooping the colour ceremony involving the colours of the King and regimental flags of the First Battalion, Royal Malay Regiment, in a guard of honour mounted by four officers and 103 men.

His Majesty then inspected the guard of honour.

Yesterday’s Warriors’ Day parade involved 58 officers and 867 men from the Malaysian Armed Forces (MAF), the police along with 152 members from the MAF Veterans Association and retired and former police personnel.

The parade was led by the commanding officer of the 10th Battalion of the Royal Malay Regiment, Lt Col Muhammad Ikhwan Hussin.

Chief of Defence Force Jen Tan Sri Affendi Buang and Inspector-General of Police Tan Sri Acryl Sani Abdullah Sani were also in attendance. The ceremony, reported Bernama, then proceeded with the sounding of the Last Post while the Jalur Gemilang was lowered.

There was also a pantomime performance about the sacrifice of national fighters in a battle that took place at the Bakara Market in Mogadishu, Somalia, on Oct 3 and 4, 1993.

The Unosom II headquarters requested the assistance of the Malaysian battalion to be deployed to the battle area to rescue US Rangers and Black Hawk helicopter crew who were under attack by the rebel guerrillas led by Mohamed Farrah Aidid.

In an effort to rescue the US Rangers, an armoured vehicle driven by Corporal Mat Aznan Awang was hit by an RPG rocket which penetrated the windshield of the vehicle, resulting in his death.

For his bravery, he was posthumously awarded the nation’s highest award, the Seri Pahlawan Gagah Perkasa (SP).

The annual Warriors’ Day celebration on July 31 honours the heroes who died while defending the country’s sovereignty.

The Warriors’ Day parade was last held in 2018.

In 2019, the ceremony could not be held due the severe haze that hit the country.

Separately, in a post on his Facebook page, Ismail Sabri urged Malaysians to nurture the fighting spirit of warriors and love for the country in conjunction with the Warriors’ Day celebration this year.

He also reminded Malaysians of the struggle and sacrifices made by these warriors in defending the country’s sovereignty.

“On July 31, we celebrate Warriors’ Day to commemorate the nation’s soldiers and to remember the services of all security forces, whether military or police, before and after our country’s independence.

“Their fighting spirit was so great that they were willing to sacrifice their lives for their beloved homeland. Happy Warriors’ Day 2022,” he said.– The Star