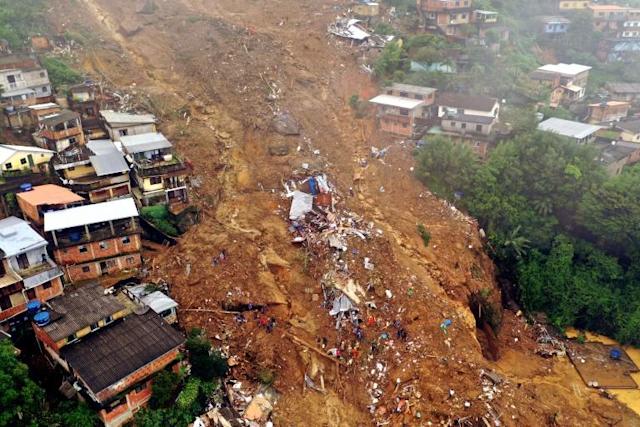 The force of the landslides ripped apart houses in neighbourhoods including Jardim Monteverde, a poor community just outside the city of Recife. Locals have likened the roaring surge of mud to a tsunami.

“It was a tragedy. I lost a lot of friends,” 49-year-old resident Maria Heronize told AFP on the verge of tears.

Rescue teams have found dozens of bodies buried after floodwater tore through the neighbourhood on Saturday.

Six more bodies — the last of those reported missing in the neighbourhood — were recovered Friday, bringing the search there to an end, the Pernambuco state government said.

Elsewhere, at least eight people remain missing, said disaster management officials for the state, scene of the latest in a series of deadly weather disasters to hit Brazil in recent months.

Crews are using dogs trained to sniff for people and planes to locate the missing.

At least 24 municipalities in Pernambuco have declared a state of emergency and more than 6,000 people have lost their homes or been forced to flee.

President Jair Bolsonaro posted a video on Twitter on Monday that showed him flying in a helicopter over the disaster zone, where brown flood water inundated large areas and gashes of mud scarred hillsides where houses once stood.

“I tried to land, but the pilots’ recommendation was that, given the instability of the soil, we could have an accident. So we decided against it,” the far-right president told a news conference.

He recalled a string of devastating floods in Brazil that have killed hundreds of people in recent months, and which experts say are being aggravated by climate change.

The rains began last week but intensified over the weekend. Overnight Friday into Saturday, the rain that fell in some parts of Pernambuco was 70 percent of what would be normal for the whole month of May.

“We never saw so much rain fall in so little time,” said 60-year-old retiree Mario Guadalupe.

“I saw the landslide happen. First part of the hill gave way, then it was just a tsunami of mud. It nearly took out my house.”

Weather-related tragedies are becoming a familiar script in Brazil. They tend to hit hardest in poor neighbourhoods, especially hillside favelas, or slums.

“Climate change could be responsible for the rise in extreme, violent rain that is being detected not only in Brazil but around the world,” Jose Marengo, research coordinator at the National Center for Natural Disaster Monitoring and Alerts, told AFP.

In February, 233 people were killed in floods and landslides in the historic southeastern city of Petropolis, in Rio de Janeiro state.

Bolsonaro drew criticism for sounding dismissive after saying “unfortunately these tragedies happen, a country the size of a continent has its share of problems.”-AFP

Ringgit opens lower against US dollar amid fears of accelerating inflation