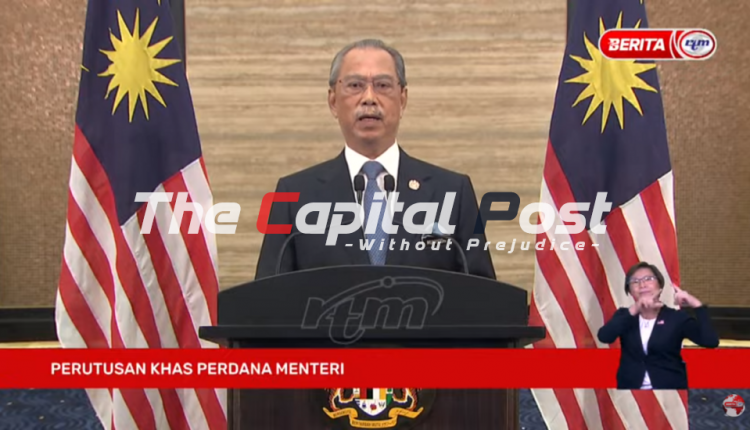 PUTRAJAYA, 16 August 2021 (The Capital Post)- PETALING JAYA: Tan Sri Muhyiddin Yassin says he has tendered his resignation and that of his Cabinet to King on today.

Muhyiddin said that this was in line with the Federal Constitution as he had lost the support of the majority of MPs in Parliament.

Muhyiddin was speaking during a live address after submitting his resignation to the King during an audience held at 12.30 noon today in Istana Negara.

He also said he hopes a new administration could be appointed soon so the country could continue running.

In a another statement by Istana Negara, Yang di-Pertuan Agong Al-Sultan Abdullah Ri’ayatuddin Al-Mustafa Billah Shah had accepted the Muhyiddin’s resignation as prime minister but appointed him to serve as caretaker until a new prime minister is named.

Muhyiddin lost his majority after 15 UMNO MPs pulled support for him.

Muhyiddin goes into records as the shortest serving Prime Minster of Malaysia which lasted for 17 months 16 days. The Capital Post