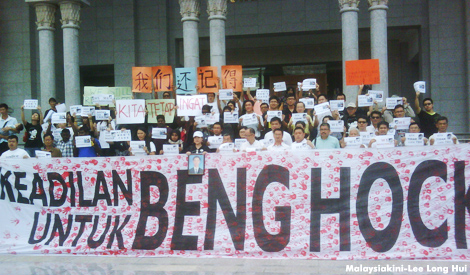 “We will also call up Tricia Yeoh, who has raised certain issues pertaining to the case, as published in a local newspaper on July 17.

“Several other witnesses, including from the Malaysian Anti-Corruption Commission (MACC), will also be called up for their statements to be recorded soon,” he said in a statement on Monday (Nov 18).

Yeoh was formerly a Research Officer to then Selangor Mentri Besar Tan Sri Khalid Ibrahim and represented the state managing the Teoh’s case.

Comm Noor Azam said the investigation papers will be referred to the Attorney-General’s Chambers (AGC) from time to time for further instructions.

On June 27 last year, Home Minister Tan Sri Muhyiddin Yassin had informed his ministry of the Cabinet’s decision to reopen the case and had instructed the Inspector-General of Police (IGP) to take immediate action.

The Attorney-General had also issued certain instructions to the task force on Dec 17,2018, and the investigation is still ongoing.

Teoh was found dead on July 16,2009, on the fifth floor corridor of Plaza Masalam in Shah Alam after giving a statement at the Selangor Malaysian Anti-Corruption Commission office on the 14th floor of the building.

An aide to DAP leader and then Selangor exco member Ean Yong Hian Wah, Teoh was 30 when he died. -The Star

Paul Yong: State, not party, has a say on resumption of duty