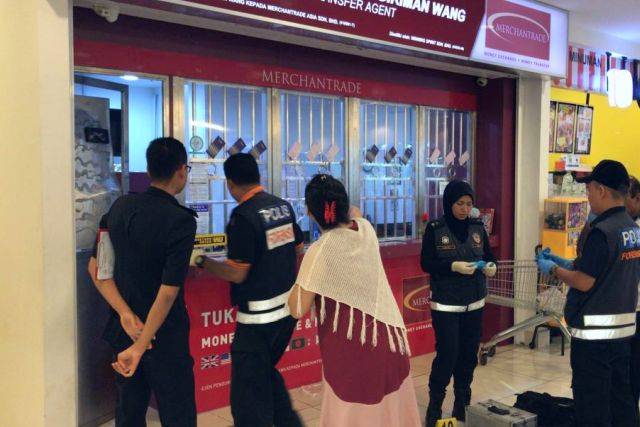 PORT DICKSON: Five men armed with axes and machetes robbed a money changer-cum-money transfer outlet here of some RM50,000 and an undisclosed amount in foreign currency in a daring broad daylight heist here.

Based on preliminary investigations, two suspects smashed a glass panel with axes and then went on to break the side door to gain entry to the outlet while three others stood guard.

“The duo entered the shop and grabbed some RM50,000 and foreign currency kept in a drawer,” he said.

“One of the staff managed to trigger the alarm before the suspects gained entry but this did not stop them,” he said.

The suspects, who wore masks and gloves, did not harm the employees.

Supt Aidi said CCTV recordings showed that the suspects escaped in a vehicle that was earlier reported stolen in Tampoi, Johor.

Police later found the vehicle abandoned in a residential area at around 5.30pm.

“Based on public information, the suspects apparently escaped in a silver car,” he said

The case is being probed under sections 395 and 397 of the Penal Code for armed robbery.

Supt Aidi appealed to those with information to call 017-422 0322 or visit the nearest police station. – The Star