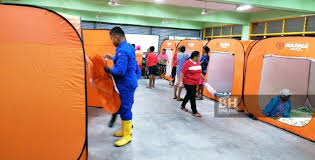 KUALA LUMPUR: The number of flood victims in Kelantan, Johor and Perak rose this morning, while Selangor and Penang showed a drop and it remained at 41 in Malacca.

The latest number of flood victims in the six states now stands at 2,633 people.

In JOHOR, the Tangkak District Disaster Management Committee (JPBD) in a statement said the district became the latest area to be hit by floods, bringing the number of victims in the state to 319 as of 8 this morning, compared to 266 victims as at Sunday night.

A total of 53 people from 11 families in the district were relocated to Sekolah Kebangsaan Simpang 5 Darat at midnight last night following rising water.

“All the victims are from Kampung Simpang 5 Darat, Kampung Parit Bunga Raya Hujung and Kampung Parit Pulai. With this latest number, five districts are now affected by floods including Segamat, Kulai, Kluang and Pontian,“ according to the statement.

In Pontian, the number of victims evacuated to Sekolah Kebangsaan Melayu Raya remained at 17 victims while in the Kulai district, the temporary relief centre (PPS) in Kampung Baru Sengkang multipurpose hall housed 139 victims and Kampung Murni Jaya Hall there are 19 victims.

In PERAK, a Civil Defence Force (APM) spokesman, said four more PPS were opened in Teluk Intan apart from Larut Matang and Selama (LMS) and Kinta districts which accommodated 124 victims from 38 families bringing the latest number of flood victims this morning to 283 victims from 83 families.

The four PPS are at the community halls of Kampung Piandang, Siputeh; Sungai Lidin, Simpang; Jelapang and Kampung Simpang Halt, he said in a statement today.

In KELANTAN, the number of flood victims continued to increase when 1,771 victims from 586 families were placed in eight PPS as of 9 am, compared to 1,681 victims involving 552 families last night.

Based on Social Welfare Department (JKM) InfoBecana portal, all the flood victims were placed in eight PPS in Pasir Mas district.

All the victims were sheltered in Sekolah Kebangsaan (SK) Lahar Yooi PPS in Tasek Gelugor while another PPS in Puri Desa hall, which previously accommodated a total of 39 victims from 11 families was closed yesterday afternoon following the recovery of the flood situation in the area.

In Malacca, the state Disaster Management Committee secretariat in a statement said the flood victims placed in two PPS in Alor Gajah this morning remained 41 victims from 12 families, the same as recorded last night.

In SELANGOR, InfoBencana website said the number of flood victims in the state continued to drop from 370 victims involving 89 families last night to 182 victims (53 families) as of 6.52 this morning.