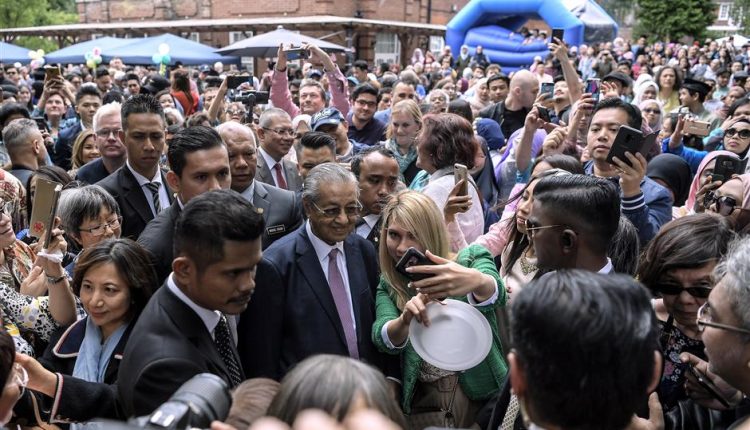 TUN Dr Mahathir Mohamad yesterday reminded students on the importance of repaying their loans so that funds will always be available for other students to further their studies.

The prime minister cautioned that any country which faces a situation where its people do not pay off their debts would eventually become poor.

“I’m not happy with learning that some people are all too happy to accept scholarships, but, once they start working, don’t want to repay their debts.

“This is bad. Any country where people don’t pay their debts will eventually become poor,” he said.

Dr Mahathir was speaking to more than 100 Malaysian students at a luncheon and networking session at the Malaysian High Commission in Belgrave Square here yesterday.

The event was hosted by Malaysian High Commissioner to the United Kingdom, Datuk Mohamad Sadik Kethergany.

The prime minister was here on a two-day working visit after attending the 74th United Nations General Assembly in New York.

In his speech, Dr Mahathir reiterated his concern about insufficient funds for scholarships.

He said repaying loans has to be made a part of the Malaysian culture.

“If you have a bad habit of not paying the money you borrowed from banks, for example, you will find that banks will not loan you money. And not only you alone — if you are from a certain race, the whole race is labelled as untrustworthy.

“As such, the reputation of being a good paymaster is very important for everyone in Malaysia. When you borrow, please pay back.

“In the past, we used to send many people abroad to study; but now, the number has reduced.”

The prime minister also spoke on the government’s Shared Prosperity Vision, which aims to reduce the disparity of wealth among all Malaysians, irrespective of background, race or religion.

“There is a need for us to redefine our target, our vision. We decided that we should have equally shared prosperity. We want to have as many people as possible to enjoy prosperity.”

He impressed upon the students the government’s willingness to provide training for those who lacked experience and education in certain areas, especially business, to improve their wealth and income. He said the success of this plan would depend largely on the people themselves.

“It’s not about the government having a good policy, it’s about the people’s response.

“We are willing to train people to understand how to enrich themselves, how to work hard, how to be honest and things like that because only these qualities will ensure the equal sharing of prosperity in Malaysia,” he said.

“We are interested only in serious people who want to make use of the opportunity to improve their wealth and income.

“If they are not capable due to lack of experience or education, then we will provide them with the proper training so that when we give them licences, they know what to do with the licence.

“If the licence is for some business and they do not know enough about business, then we will train them until they are capable of doing business.”

However, Dr Mahathir warned that the government would not hesitate to revoke licences or permits when it discovered instances where they had been “sold” to others.

“Under the New Economic Policy, we gave many contracts to people, who in turn, sold them off. We gave licences to people and then they sold their licences. And then they became poor again.

“So it is not about giving them opportunities, it is about ensuring that whatever help we extend leads to the desired results.

“We have to build a nation where people can work hard, they are honest and they don’t steal. Only then will Malaysia become enriched again,” he said. -NST