Pocket Rocketman is now a Datuk 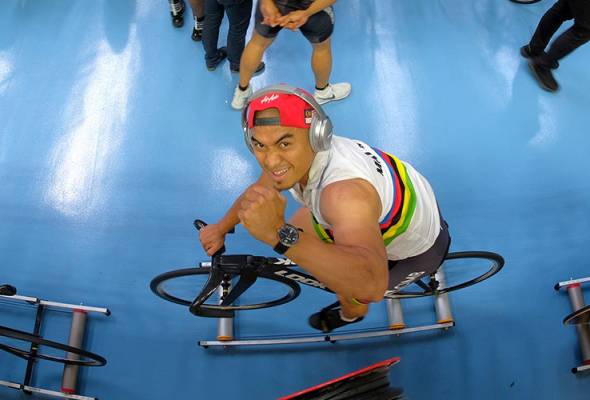 Former world keirin champion Azizulhasni Awang received a timely morale boost ahead of the Tokyo Olympics after he was conferred the Darjah Kebesaran Darjah Dato’ Paduka Mahkota Terengganu (DPMT), which carries the title of Datuk, yesterday.

Azizulhasni, who will be competing in his fourth Olympics in Japan on Aug 4-8, said he was surprised but honoured to receive the title.

He thanked Sultan of Terengganu Sultan Mizan Zainal Abidin, the Terengganu government and its state sports council for their support.

“I was shocked when I first heard the news. At first, I did not believe it. I thought my friends and the media were playing a joke on me, especially as we have only a week left before we head to Tokyo,” said Azizulhasni.

“Of course, I feel very happy and honoured to be the first Terengganu-born Olympian to receive the title.

“This will give me added motivation to realise the nation’s dream of winning our first-ever Olympic gold medal.”

Olympic Council of Malaysia (OCM) president Tan Sri Norza Zakaria believes Azizulhasni deserves the recognition after what has been a stellar career to date.

“I think they (Terengganu) made the right decision to confer him the title,” said Norza.

“Whatever he (Azizulhasni) does, he does it for the country.

“By recognising an athlete, it will definitely spur him or her to strive for greater heights.

“This will definitely boost his motivation ahead of the Tokyo Olympics. We constantly strive for marginal gains, so this is a positive for us.”

Azizulhasni, 33, won bronze in the keirin at the 2016 Rio Olympics. It was the first time Malaysia had won an Olympic medal in cycling. He is also a 10-time Asian Championship gold medallist.-NST