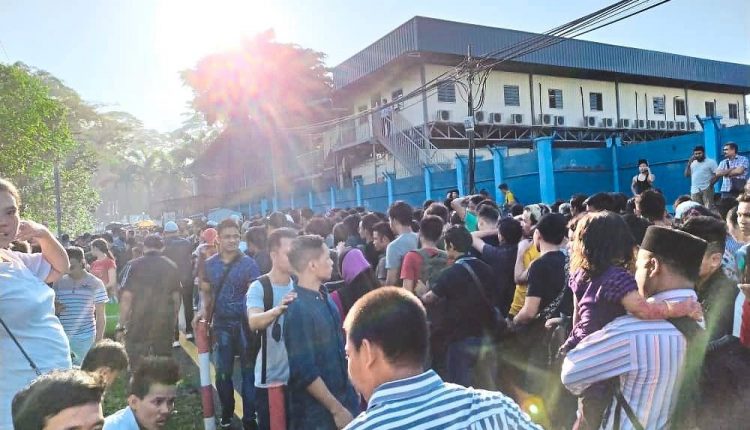 KUALA LUMPUR: Rumours about an “open registration day” for asylum seekers caused a few hundred people, mostly Myanmar nationals, to wait outside the UNHCR Malaysia headquarters here for as long as eight hours.

The crowd, consisting men, women and children – some from as far as Johor – reportedly started gathering around 1am yesterday, but dispersed peacefully at noon after being informed by UNHCR that the online rumours were “erroneous”.

“Some of my friends got registered yesterday (Wednesday), so I came here today hoping that we could get registered too, ” said a woman from the Myanmar Kachin community.

“I feel sad because we waited the whole night but there was no response on whether we should go back. At 7am, we were told to queue up and at around 9am, we were asked to disperse.”

Another Myanmar national, Aung, travelled from Melaka at 2am with 10 others after hearing that UNHCR was holding open registrations for Arakan refugees.

“I cannot go back to Myanmar as there is a lot of conflict in my village that has caused many deaths.

“That’s why it is important for me to have a refugee card so that I can stay longer in Malaysia without disturbance from the police, ” said 21-year-old Aung, who left his home four years ago.

Several asylum seekers who actually had appointments to be interviewed at the UNHCR headquarters were forced to reschedule.

“I’ve applied for refugee protection many times and I received a call from UNHCR two days ago to come in today, but they didn’t let me in due to the crowd, ” said 23-year-old Shamsuddin, a Rohingya.

“I hope they will allow me in later or else I will have to come back another day.”

The interview is one of the first steps in the refugee status determination process, which may lead to the holder being granted a UNHCR card that recognises the holder as a refugee under international protection.

Despite Malaysia not officially recognising refugees in the country, UNHCR card holders are informally allowed to work without the risk of immigration detention and are charged discounted rates at public healthcare centres.

Alliance of Chin Refugees coordinator James Bawi Thang Bik said they could not verify the rumours, which they first heard the day before.“Sometimes the way information is shared can cause misinterpretation, so I’d like to request that UNHCR work closely with community leaders as we can help to manage our people, ” he said.

According to James, refugees in Malaysia may have to wait up to 10 years before they are resettled.

In a statement to The Star, UNHCR said: “UNHCR receives some 700 to 800 individuals at its office every day for a variety of purposes. The group remained calm and cooperative as UNHCR spoke with them and with community leaders, informing them that the message they received was erroneous.” -The Star

Homosexual HIV cases on the rise