KJ’s pothole mishap: a lesson down the road 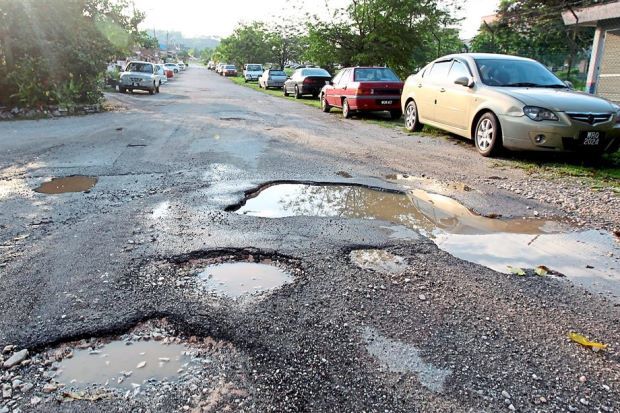 PETALING JAYA: Khairy Jamaluddin’s recent accident caused by a pothole while cycling has been the talk town as of late.

But beyond the sad, albeit dangerous state of our roads, what exactly is the bigger picture when it comes to potholes and the popular minister suffering minor injuries because of them?

While we all do feel sorry for him, his fall had diverted a lot of attention to one of the leading causes of road deaths.

It is hoped this unfortunate event involving the Science, Technology and Innovation Minister can morph into a good outcome – that of fixing potholes quickly and reducing the toll of motorcyclists involved in road crashes.

Just for a little bit of background, Malaysia ranks the third highest in Asean when it comes to road crash deaths.

About 65% of road crash mortalities in Malaysia involve motorcyclists, and more than 80% of these accidents happen on roads other than toll roads.

“According to data, a lot of crashes involving single motorcyclists are actually due to a sudden change in direction and a high probability of attempting to avoid potholes,” said Professor of Transport, Ahmad Farhan Mohd Sadullah of University Sains Malaysia.

After referring him to a statement made by the Ipoh City Council where Perak Menteri Besar Saarani Mohamad said that they “would wait for a few more and fix them all at once to lower the cost”, Farhan insisted that things shouldn’t be handled this way.

“Maybe it’s about material and mobilisation costs, but it is the responsibility of authorities to ensure that there are no potholes,” he said.

“If you want to have first-class roads there must be a change in standard operating procedures. Every pothole is a risk to every road user.”

Farhan theorised that while repair works could be delayed due to procurement and funding issues, it could also be a matter of manpower.

“By right, they should know their own roads and if there’s a pothole, they should fix it immediately. That should be their KPI,” said Farhan.

However, if the authorities – especially those of smaller states – do not have their own team, they might have to outsource. With procurement policies in place, repair works could indeed take a longer time.

But Farhan, who is also the deputy vice-chancellor of Universiti Sains Malaysia and was once director-general of the Malaysian Institute of Road Safety Research from 2008 to 2011, sees a bigger picture.

He advised that we should look beyond the problem and realise that sometimes the authorities’ hands are tied.

“After many years in road safety, I feel that the policy of financing road maintenance is the major issue, and that road tax should be used to partially finance the cost of road repairs on non-toll roads.”

According to Farhan, the road tax collected by the Road Transport Department goes to the government’s Consolidated Fund yet nothing is set aside specifically for transport at the moment.

“Road tax does fund many public transport projects like Prasarana’s MRT, LRT and Rapid Buses, but not road maintenance.

“So, what are we paying for then? Bad road conditions?” Farhan asked rhetorically.