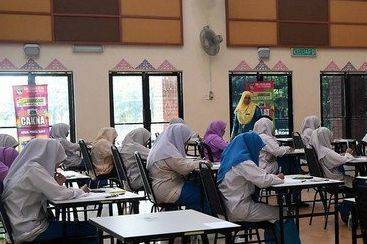 PETALING JAYA: Malaysian students have improved in mathematics and science according to the Programme for International Student Assessment (PISA) 2018.

Some 59% of students here can interpret and recognise, without direct instructions, how a situation – for example, converting prices into a different currency – can be represented mathematically.

And, some 63% can recognise the correct explanation for familiar scientific phenomena and can use such knowledge to identify, in simple cases, whether a conclusion is valid based on the data provided.

Malaysia was among 12 countries and economies that saw significant improvements in students’ mean performance in two of the three Pisa subjects tested.

However, students did not meet the Organisation for Economic Co-operation and Development (OECD) average in reading, mathematics and science.

The Pisa results were released at 4pm (Malaysian time) by the OECD secretary-general Angel Gurría at the OECD headquarters in Paris, France.

In the last decade, Malaysia made significant progress in ensuring that all children reach minimum levels of proficiency in reading and mathematics by the end of lower secondary education.

Students performing above minimum proficiency in reading grew by over 10 percentage points but they were stronger in “locating information” than in “understanding”.

Some 84% of students agreed that their teacher shows enjoyment in teaching, and students scored higher in reading when they perceived their teacher as more enthusiastic.

In Malaysia, 54% of students can identify the main idea in a text of moderate length, find information based on explicit, though sometimes complex criteria, and reflect on the purpose and form of texts when directed.

Some 10% of disadvantaged students scored in the top quarter of reading performance within Malaysia, indicating that disadvantage is not destiny.

However, compared to the OECD average, students were considerably slower at completing the test in Malaysia (47 minutes and 46 minutes).

Conducted since 2000, Pisa is administered by the OECD every three years on 15-year-olds and offers students questions in the main language of instruction in their respective countries.

Each round focuses on either reading, mathematics or science.

Some 600,000 students completed the assessment representing about 32 million 15-year-olds in 79 participating countries and economies.

The Pisa 2018 results also revealed that 41% of Malaysian students have a growth mindset, and 80% say they can usually find a way out of difficult situations.

While 36% reported being bullied at least a few times a month; 87% agreed that it is a good thing to help students who cannot defend themselves; and 81% said that their schoolmates co-operate with each other.

Although girls expressed greater fear of failure than boys, especially among top-performing students, 75% agreed that, when they fail, they worry about what others think of them.

Malaysia aims to achieve above the global average and be in the top one-third of countries participating in Pisa and Trends in International Mathematics and Science Study (TIMSS) by 2025, in line with the Malaysia Education Blueprint 2013-2025. -The Star