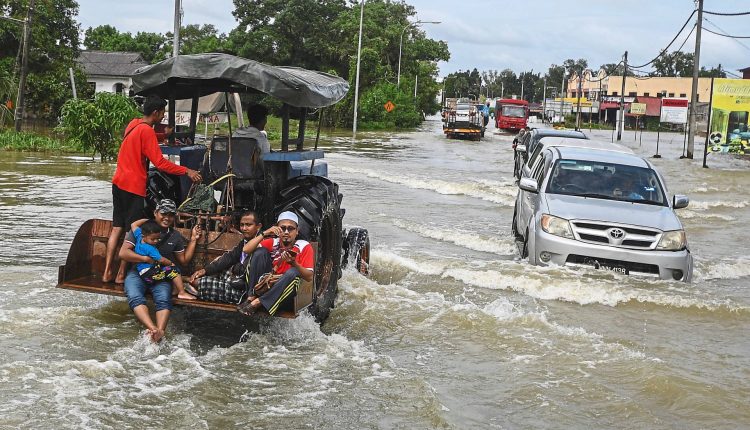 PETALING JAYA: The north-east monsoon has started in earnest, and so have the floods, with two states in the east coast hit heavily as government preparations go into overdrive.

The first fatality has also been recorded, the victim a seven-year-old boy.

According to the InfoBencanaJKM Application, 3,763 victims from 1,347 families have been evacuated in Pasir Mas and are being housed in 22 temporary relief centres (PPS).

There are 225 evacuees (67 families) in six PPS in Machang and nine victims from two families in one PPS in Tumpat.

In another development, based on the forecast.water.gov.my website, the water level at Sungai Golok in Rantau Panjang, Pasir Mas, receded to 10.45m compared to 10.47m yesterday morning, which was still above the danger level of 9m.

The floods in Kelantan also claimed its first victim, a seven-year-old boy whose body was found in a flooded padi field in Felcra Teratak Batu in Pasir Puteh yesterday.

Mohammad Ilham Hasmadi was reported to have followed his uncle to an irrigation canal at about 6.30pm on Sunday to fish when he slipped from a plank bridge and fell into the swollen canal.

Kelantan police chief Datuk Hasanuddin Hassan said members of the search and rescue team found Mohammad Ilham’s body at around 8am yesterday, about 400m from where was believed to have slipped into the canal.

The body was sent to Tengku Anis Hospital in Pasir Puteh for post-mortem, he told reporters after attending a mass circumcision programme at the Kelantan police headquarters here yesterday.

The Kelantan Social Welfare Department (JKM) has placed various essential supplies, including food, at 209 forward bases in preparation for floods in the state.

Its director Said Sidup said the food supply included rice, canned food such as sardines, chicken curry, coffee, sugar, Milo and mineral water, which would then be distributed to the flood relief centres.

“The Kelantan JKM received an initial allocation of RM1mil from the Federal Government and RM300,000 from the state government for the purpose.

“The state government has also approved an emergency allocation if the need arises,” he said yesterday.

“So far, the supply is enough to accommodate the needs of 13,000 victims for three days,” he said.

In Terengganu, the number of flood victims increased to 5,935 people from 1,796 families yesterday evening, compared to 5,807 people (1,719 families) in the morning.

In Jertih, a convoy meant to provide relief for flood victims ended up needing to be rescued itself.

The volunteers, who were from Kuala Lumpur, who were members of the Malaysia International Search and Rescue (MISAR) team, were stranded at 8pm on Sunday.

Besut district police chief Supt Abdul Rozak Muhammad said the incident took place in Kampung Bekok, near Jertih, when they were leaving for another location after sending aid to Kampung Tenang and Kampung La.

“All the volunteers are safe. They were actually moving without informing the parties managing the flood operation rooms.

“Following the incident, I urge anybody and also non-governmental organisations to inform the police or the Terengganu Disaster Management Secretariat (of their plans) to facilitate the giving of assistance,” he said.

Abdul Rozak said the team was rescued with the help of villagers and their vehicles (four vans).

As of yesterday morning, the flood in Terengganu had affected 5,807 people from 1,719 families, while 123 flood relief centres had been opened. — Bernama

‘Help the poor to improve their lives’