Two nabbed, 250k worth of drugs seized in Sabah raids 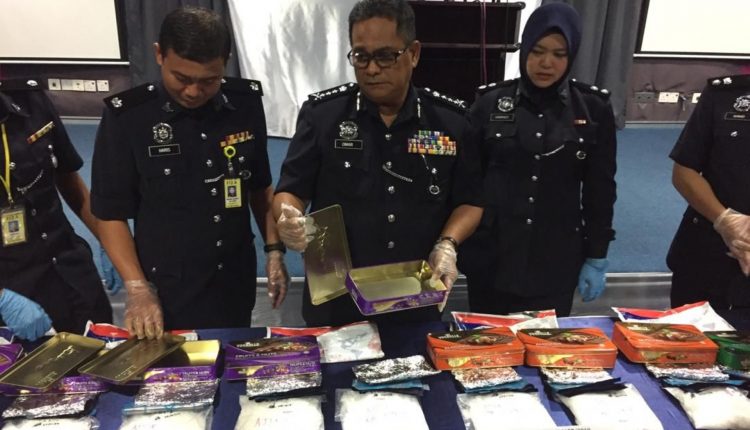 KOTA KINABALU: Two suspected drug dealers were nabbed in separate raids and drugs worth over RM250,000 were seized on Wednesday (Oct 23).

In the first incident, a 21-year-old Malaysian working as a food delivery man was arrested at a commercial centre in the Donggongon town of Penampang near here at about 12.05pm on Thursday (Oct 24).

“When policemen approached the suspect, he was carrying five packages which contained chocolate cans, ” said Sabah Police Commissioner Datuk Omar Mammah during a press conference here on the same day.

He said inspection of these cans led to the discovery of over 5kg of drugs believed to be syabu.

Omar said the suspect tested positive for drugs and had been remanded for seven days until Oct 30.

“We are trying to track down the main supplier as well, ” he said adding, that the seized drugs were believed to be for local distribution in Sabah.

In the second case, a 33-year-old foreign labourer was arrested near the UUC residential area in Telipok, Menggatal, near the state capital at about 4.50pm the same day.

The suspect, who was in the car at that time, surrendered his songkok to the police when he saw them approaching.

“When we checked his songkok, we found drugs believed to be syabu kept in a plastic bag inside, ” Omar said.

He added tha the drugs weighed about 251g and valued at about RM18,500. It is believed to be supplied from a female immigrant in Menggatal.

He said the suspect had been remanded until Oct 30 and efforts are being done to find the supplier.

“The suspects in these two cases are being investigated under section 39B of the Dangerous Drugs Act 1952. Upon conviction, a person can be sentenced to death or be given life imprisonment with whipping, ” Omar said.

He also said the police contingent’s Narcotics Department had arrested a total of 13,670 suspects for various drug offences between January and October 24 this year.

“This is an increase of 2,932 arrestees, or 29%, compared to the same period last year, ” Omar said, adding that of the figure, 870 drug were dealers while 338 were repeat offenders. -The Star