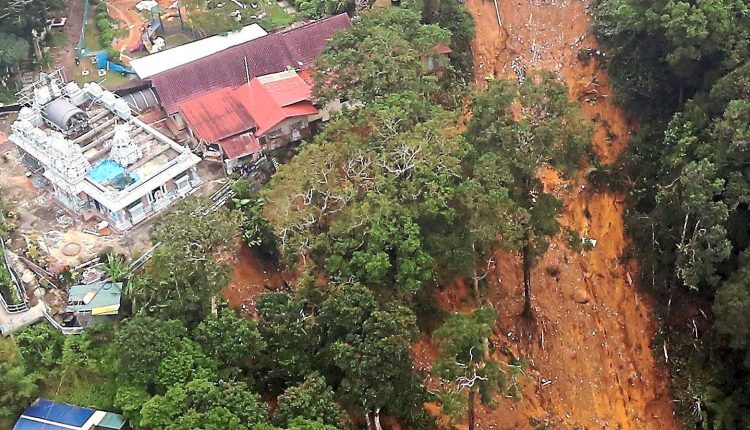 GEORGE TOWN: Emergency support teams in Penang are fully prepared to handle landslides and flash floods during the current spell of wet weather.

At Penang Hill in Ayer Itam, members of the Penang Hill Maintenance and Landscape Unit are carrying out routine checks daily.

“Ever since the storm in November 2017, we have been on full alert whenever there is heavy rain or wind, and are preparing our teams.

“Every day, our teams will go around the hills to monitor the hotspots for landslides. And if they come across situations such as clogged drains or fallen tree branches, they would attend to them immediately,” he said.

Cheok said the teams were geared to tackle situations arising from these wet monsoon season.

Local residents who join their maintenance operations occasionally are also on full alert.

“Some of the residents here volunteered to join us when we clean areas and drains of fallen branches, leaves and debris,” he said.

“We are all extra cautious, especially this rainy season as clogged drains could easily cause soil erosion.

“When drains are clogged, water would overflow and splash onto the slopes, which is very damaging and would lead to soil erosion, so we pay extra attention to these things even though they may seem minor,” he added.

Meanwhile, state environment committee chairman Phee Boon Poh said the state depended on officers on the ground and cooperation from all teams.

“But in terms of logistics and planning, we are ready,” he said.

State public works, utilities and flood mitigation committee chairman Zairil Khir Johari said in the meantime, the state was not aware of any major landslides.

“If there are any reported, we will mobilise the teams,” he said.

On Nov 4, 2017, Penang was hit by a series of floods that caused landslides and uprooted over 100 trees. Roads were closed down and there was damage to homes, vehicles, public property and infrastructures.

The disaster, touted as the worst in 30 years, claimed seven lives and forced over 3,500 people to be evacuated as the state was inundated by up to 4m of water after the 18-hour storm.

At Penang Hill, it was reported that over 300 landslides occurred in 2017.

Meanwhile, Penang Island City Council (MBPP) has clarified that the works being carried out along steep slopes in Mount Erskine opposite Mont Residence Apartments here were for a connecting road.

In a statement, the MBPP said the works included slope stabilisation and a proposed road that would pass through land belonging to the state government.

“The construction work by the developer is to mitigate the traffic impact due to the new development and to ease traffic at the Persiaran Halia area.

“The road construction project site will pass through the contour area of 76.2m and on a gradient of above 25° gradient.

“The state policy under the Penang Structure Plan has classified the project as a special project,” the statement said, adding that geotechnical engineers were responsible to supervise and monitor the work at all time.

The MBPP was responding to concerns raised by Sahabat Alam Malaysia and nearby residents on the earthworks and hill-cutting along steep slopes at Mount Erskine. -The Star

Mahathir back to work after brief nose bleed