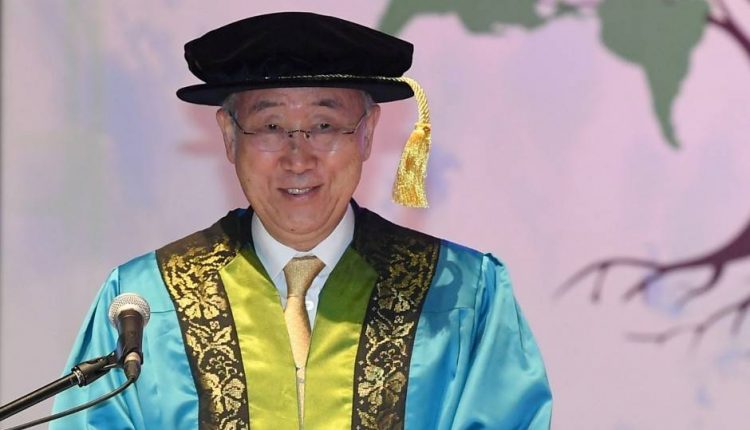 In his lecture entitled “Sustainable Development Goals and Climate Change”, Ban expressed his disappointment over United States’ decision to withdraw from the Paris climate accord, which he regarded as the world’s best hope to confront climate change.

Ban stressed that the climate change was a global challenge, which demanded global solutions, and no country no matter how powerful or resourceful, could address the issue alone.

He said the Paris agreement, signed by 197 countries in 2015, offered a clear game plan to confront the serious threats to this planet and set viable targets to impede rising temperatures, constrict greenhouse gas emissions, and spur climate-resilient development and green growth.

“Climate change doesn’t respect any border, our action must transcend all the frontiers. I strongly and sincerely hope that US will come back and return to our joint efforts to address this climate change,” he said.

From record-breaking heat waves and wildfires to typhoons and flooding of historic intensity, Ban said climate change was no longer a debate and was clearly here right now.

According to media reports, US recently submitted paperwork to the United Nations that began the one-year process to formally withdraw from the historic Paris climate accord.

Trump, a longtime critic of the agreement, has bemoaned what he said was unfair treatment under it that imposed burdens on American workers and businesses. – Bernama