Fire breaks out at integrated waste treatment plant near Seremban 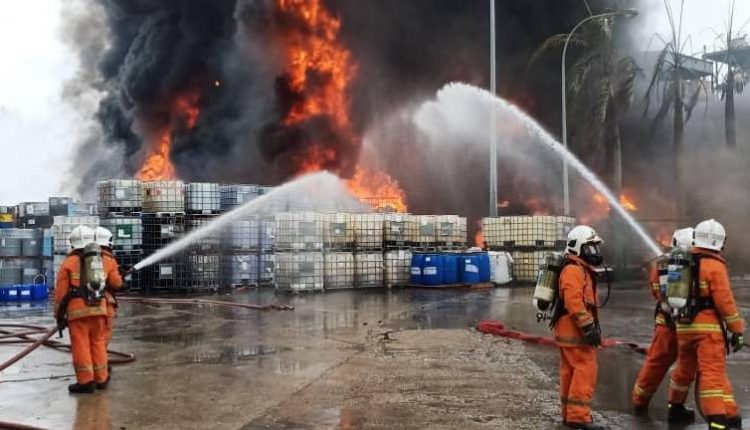 SEREMBAN: A fire has broken out at the Kualiti Alam integrated waste treatment plant in Bukit Nanas near here.

Firefighters from several stations have been dispatched to the scene to fight the fire that is believed to have started at around 1pm Wednesday (Oct 2).

It is learnt that the fire broke out at a yard where some of the waste containers had been stored.

A Fire and Rescue Services Department spokesman said the containers were filled with “flammable liquid”.

These were stored in a 120m by 120m storage area, and about 60% of the area was razed in the blaze,” the spokesman said.

A thick column of black smoke could be seen from a distance away, which caused some concern among residents living nearby.

The last time a blaze was reported at the plant was in February 2015 when four warehouses storing toxic waste went up in flames.

However, authorities then gave an assurance to the public that there was no threat of toxic fumes having an adverse affect on their health.

At the time, a state Environment Department spokesman had also dismissed postings in social media that the fire resulted in toxic fumes.

The public has been urged not to panic as there was no danger of poisonous or hazardous gas spreading in the surrounding area.

Kualiti Alam is the only approved premises in the country to provide complete off-site scheduled waste management from collection, transportation, analyses and treatment to final disposal.

Now owned by Khazanah Nasional, the plant can store and treat more than 100,000 tonnes of all classes of hazardous waste at any one time. -The Star