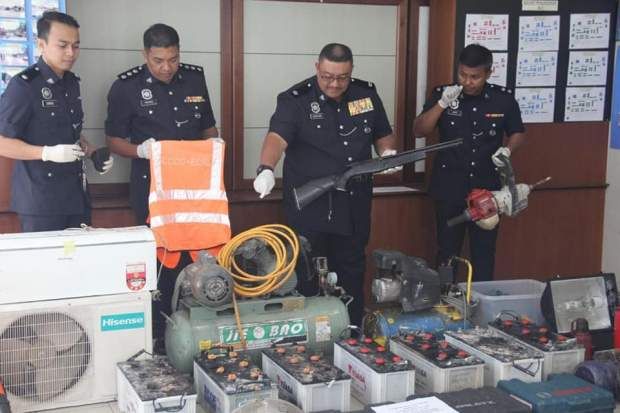 KUANTAN: A gang of thieves who have been stealing building equipment along the East Coast Rail Link (ECRL) construction sites for more than a year has finally been taken down by police.

He said that three men and a woman from the so-called Geng Mamat were arrested on suspicion of stealing equipment worth RM30,000 from the ECRL sites.

“In the first raid, police apprehended a man and a woman aged 21 and 25 at a house in Kampung Sungai Ling while on the second raid in Kampung Paya Pasir, a 32-year-old man was arrested.

“The third raid was carried out at 11.30pm at a house in Jalan Kampung Pertanian Pekan Tajau and a 19-year-old man was arrested for further investigation,” said DSP Norzamri.

He said police also seized a Proton Iswara, an air rifle and a handcuff believed to have been used by the suspects for impersonation to extort foreign workers.

He added that a plastic packet containing 2.13gm of syabu was also found.

DSP Norzamri said the gang would steal equipment at the ECRL construction sites at night.

“Urine test found that all suspects tested positive for methamphetamine while the first and third suspects have records of drug abuse.