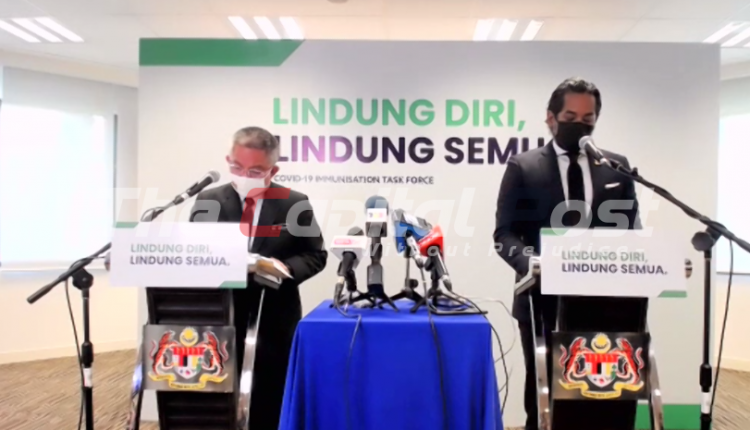 KUALA LUMPUR: Greater awareness and concern among the people have caused registrations for Covid-19 vaccination to surge in the country.

Covid-19 National Immunisation Programme Minister Khairy Jamaluddin said so far, there were 12,117,091 registrations which makes up close to 50 per cent of the nation’s population of those aged 18 and above.

“The realisation of the people to protect themselves and ward off the virus has become something pressing. We will increase the vaccination rate due to the increasing worry among the people.

“Health Minister Datuk Seri Dr Adham Baba and I had a meeting with all state level Covid-19 Immunisation Task Forces (CITF) to speed up the vaccination exercise,” he said during a weekly CITF press conference via Zoom today.

To date, Khairy said 2,913,009 people have received their vaccination.

As for the AstraZeneca vaccine opt-in programme, as of yesterday, up to 213,232 people have been immunised.

Khairy said the average attendance rate for vaccination was 80 per cent.

“Some 20 per cent are no show due to various reasons such as transportation, lackadaisical attitude and they want to be vaccinated later.

“We are planning at the district and state levels how to ensure we do not waste the vaccines we have … we will use a reserve list and call those on it.

“We have decided to send the appointment lists to district and health authorities so they can contact those that already have appointments earlier and to ensure they show up on the set date,” he added.

Khairy added that there were no plans to compound those who do not turn up for the appointments.

“I feel at this point we will continue to contact and encourage them to go for the appointment. (Compounding) That is the last option,” he said.

There would be 668,520 bottled doses from Sinovac with lot releases this week.

Khairy added that the CanSino Covid-19 vaccine is being evaluated by the National Pharmaceutical Regulatory Agency (NPRA).

“CanSino has furnished NPRA with the answers to questions posed as well as information needed last week. We have asked that the process be sped up.

“On the Sputnik V vaccine, Health Minister Datuk Seri Dr Adham Baba will sign an agreement with Duopharma Biotech Bhd and its evaluation will be done by NPRA.

“The same goes for Johnson and Johnson’s vaccine which is being evaluated by NPRA,” he said.

On people being assigned to different states to receive their vaccines, Khairy advised them to update their address fields and postcode details which are additional features in the MySejahtera app.-NST