Man who died of heart attack gets Hindu send-off 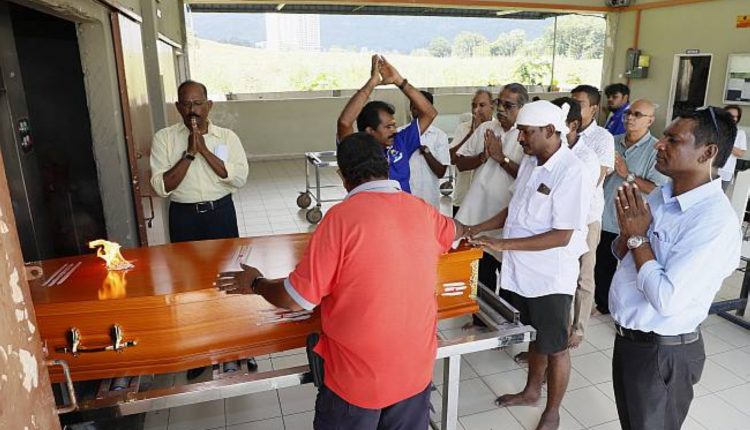 GEORGE TOWN: Former lift operator Terry Keun, who died of a heart attack, was sent off with traditional Hindu rites by a home for the aged, where he had spent his final days with his disabled sibling.

Keun, 74, was given a traditional funeral by several members of the Penang Hindu Association at the Penang Hospital mortuary.

Keun, who had lost his wife many years ago and lived alone, came to the Penang Thiru Arut Prakasa Vallalar Association in Bayan Lepas, where his younger brother, who is disabled, had been residing since the home was set up five years ago.

Home chairman T. Ravi said Keun had for many years visited his brother there.

“When we heard that Keun was living alone and had a wound caused by diabetes, we invited him to live at the home as well.

“He used to work as a lift operator, so we wanted to help his wound heal and look into his health needs,” he said, adding that the home offers alternative homeopathic treatment and care for those without a family.

Ravi said the home decided to give Keun a traditional Hindu send-off as he had no one to perform his last rites.

“Although we found out Keun had relatives, no one came forward.

“He used to return to his flat in Rifle Range once in a while but mainly, he had been living with us,” he added.

Ravi said Keun had complained of chest pains on Nov 4 before he was taken to hospital.

He died on Tuesday after suffering a heart attack.

“We wanted to give him a good send-off but we did not have the resources as we are a NGO and our funding is limited.

“We then contacted the Penang Hindu Association for help,” he said at the Batu Lanchang Hindu cemetery where Keun was cremated on Wednesday.

Penang Hindu Association deputy president P. Murugiah said this was the second non-Hindu funeral that the association had conducted in 33 years.

“Since 1986, we have conducted 561 final rites for unclaimed bodies.

“We are contacted by the old folk’s homes and the Penang Hospital whenever there is an unclaimed body.

“This time when the Penang Thiru Arut Prakasa Vallalar Association contacted us, we came in to help,” he said.

Murugiah said expenses for Keun’s funeral including the coffin, ceremony, transportation and sea burial, costing about RM750, were borne by the Penang Hindu Endowment Board.

Kuen’s friend and fellow resident S. Aruldass, 64, who was at the cemetery, said he would miss his jovial and nice friend.

“We watched cartoons together and whenever Keun went out, he would return with coffee or tea for me,” he said. -The Star

Cradle Fund CEO’s body was unlike bodies of other fire victims, court told