MIC to get same seats as in GE14 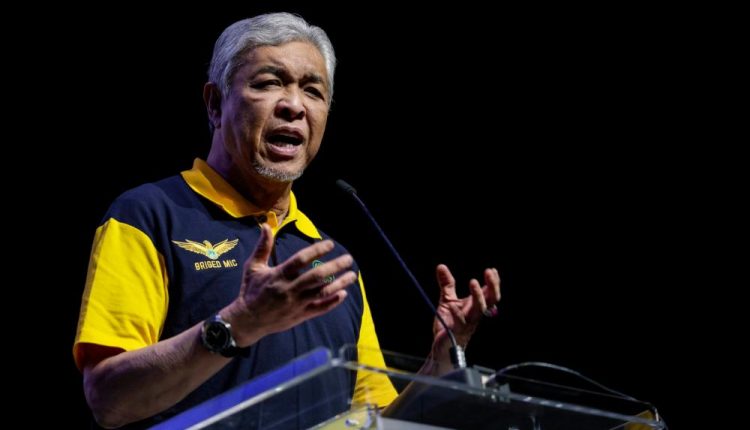 KUALA LUMPUR: MIC has been given the nod by Barisan Nasional to contest all its traditional parliamentary and state seats in the coming general election, says Datuk Seri Dr Ahmad Zahid Hamidi.

“I promise that all the seats that were contested in the previous general election, I confirm that MIC will get them again,” he said at the launch of the National MIC brigade at Axiata Arena Stadium here yesterday.

He said MIC president Tan Sri SA Vigneswaran, who was also at the event, could lobby for more seats but this would be subject to negotiations.

“If you want more seats, Tan Sri Vigneswaran has to negotiate with Tok Mat (Datuk Mohamad Hasan who is the coalition election director).

During the 14th General Election in 2018, MIC contested nine parliamentary and 18 state seats.

The party won the Tapah parliamentary seat that was contested by MIC deputy president Datuk Seri M. Saravanan while the Cameron Highlands seat was won by Datuk C. Sivarraajh.

However, MIC lost the Cameron Highlands seat after the Election Court nullified the results, paving the way for a by-election in January 2019 that saw Umno candidate Datuk Mohd Ramli Noor winning the seat.

Earlier, in his speech, Ahmad Zahid said he was confident MIC would win more parliamentary and state seats in the coming polls.

He hinted that Vigneswaran should also be given a seat to contest.

Vigneswaran won the Kota Raja parliamentary seat in the 11th General Election in 2004.

“It shouldn’t be a problem for MIC Youth chief K. Raven Kumar as he is already a state assemblyman.

“As for the MIC women’s chief (Datuk Mohana Muniandy), go look for a place and get ready.

“I will sign the watikah (letter of candidacy),” he added.

Raven Kumar is currently the state assemblyman for Tenggaroh in Johor and a state executive councillor for tourism, environment, heritage and culture.

Meanwhile, Ahmad Zahid lauded MIC as having the most prepared “war room” for the coming general election.

He praised MIC for remaining loyal to Barisan despite the coalition suffering a crushing defeat in the 2018 general election.

He reminded MIC to remain united with Barisan in facing the coming polls.

What’s in store from WiFi 7?