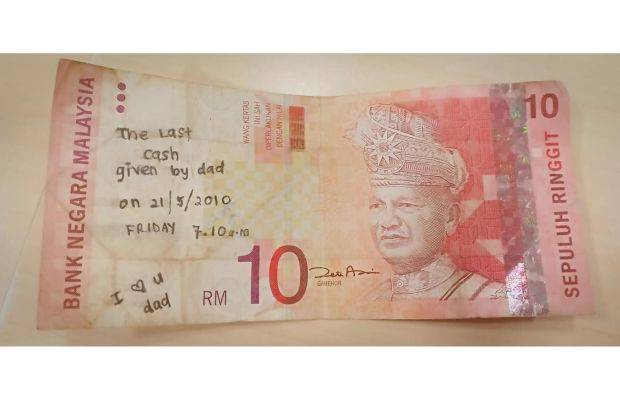 PETALING JAYA: Anne Malar Yesudas, from Melaka, was just 17 when she last saw her father alive.

He had sent her to school on the morning of May 21,2010, but later that day met with an accident that claimed his life.

Anne’s father had given her RM10 that morning.

On the note, Anne had written with a pen that it was the last thing given to her by her dad and that she loved him.

And she kept that note in her purse, which was stolen sometime in September 2018.

The 26-year-old engineer was extremely devastated at losing the note which she treasured.

However after more than a year later, Anne will be reunited with her note because of the power of social media and the kindness of a stranger.

Hyza Ezany noticed the writing on an RM10 note and knew it would be of sentimental value to the writer.

The 38-year-old bank officer decided to use Facebook to look for the person.

The post was shared 25,000 times and within a few days, Hyza was able to locate Anne.

Hyza said many people contacted her claiming it was their note, but she knew that Anne was the right person.

She said that Anne will be collecting the note from her on Thursday (Dec 5).

“I posted on Facebook with an intention to find the owner but I didn’t realise that many would have the same sentiments as me. They played a role in finding Anne, ” she said.

Anne believes those who also shared Hyza’s post played a part in helping her locate the note.

“All of us have will face such situations in our life, ” she said, adding that Hyza and her family will always be showered by God’s blessings. -The Star