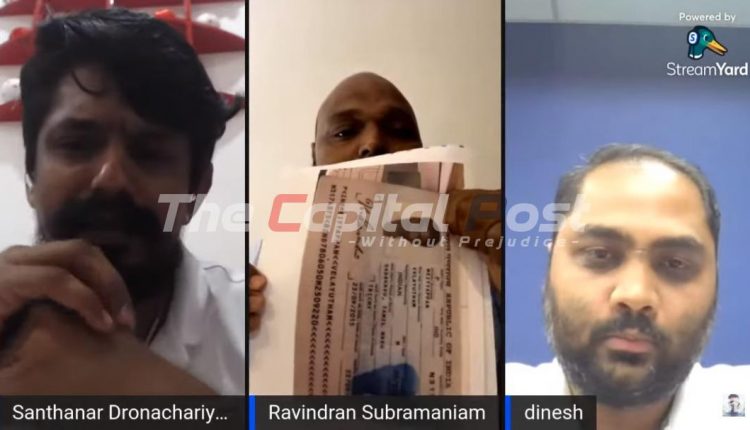 Kuala Lumpur, 20 June (The Capital Post)- Mr Ravindran Subramaniam the Chief Operating Officer of Masala Wheels a social enterprise given his explanations on the allegations against him about alleged torture to his ex-employee Velayutham, an undocumented person from India.

He has given his clarification on a YouTube live stream yesterday in ‘Santhanar Dronachariyar’ channel which was hosted by the owner of the channel Santhanar Drinachariyar while also participated by Dinesh, one of the directors of Masala Wheels.

He said the passport of Velayutham was not burnt and showed the photocopy of it via the live stream and currently the passport with his lawyer.

When asked about the burning incident happened at Masala Wheels Ravindran said it was a true incident which happened between two employees due to some misunderstanding and he was not aware of the incident until he was contacted by his employees.

He stated that, Michael who was the victim was rushed to the nearby clinic and Mohan who set him on fire surrendered himself at a police station in Petaling Jaya on the same day.

Ravindran said, he employed undocumented Velayutham in the terms of kindness and humanity because Velayutham’s agent requested to him to give him a temporary work and shelter until the agent can find another job for Velayutham.

According to Ravindran, Velayutham started working at Masala Wheels from November 2018 until the day he disappear which was March 7th 2020.

In the live stream Ravindran also shared, he has given full responsibilities of the shop to Velayutham such as managing the full operation of the shop including the banking when Ravidnran had some personal issue for a period of time.

According to him, problem arise between them when Ravindran notice a huge sum of money was missing from the petty cash during auditing.

‘When I asked him about the missing cash, Velayutham asked me to double check the receipts and after two days I received a call from India where they told me that I am torturing him and I need to send him back to India immediately”, said by Ravidnran.

When Ravindran enquire about the phone call, Velayutham stated that he is afraid of the current situation because of the burning incident happened to his co-worker Michael.

Ravindran said he is ready to give full cooperation to the authorities for the investigations.