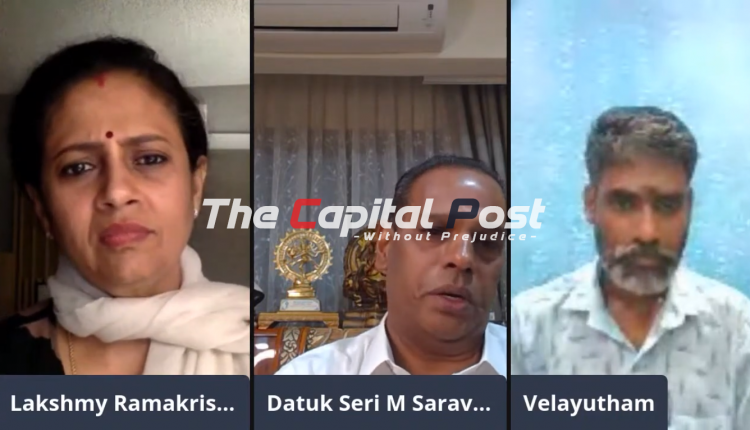 Kuala Lumpur, 18 June (The Capital Post)- Our Human Resource (HR) Minister Datuk Seri M Saravanan have pledge to Velayutham and Lakshmy Ramakrishnan that justice will be served and further investigations will be done regarding the issue of famous banana leaf restaurant alleged torture to their employees.

Datuk Seri M Saravanan have given his words yesterday in a live session streamed in Lakshmy’s official YouTube channel.

On 16 of June, in an Indian YouTube talk show named ‘Nerkonda Paarvai’ Velayutham who was a undocumented employee in the restaurant told that he was tortured, beaten, not paid properly and his co-worker was set on fire until his waist area to Lakshmy Ramakrishnan, host of the show.

This issues have gone viral in social medias to the extent it was noticed by our HR Minister Saravanan.

In the live session yesterday, Saravanan confirmed that the burning incident was true and the person who did the cruel act was detained for further investigation.

He also promised to Velayutham that stern action will be taken according to the law if other allegations was found true against one of the owner of the famous banana leaf restaurant in Old Town, Petaling Jaya.

When asked by the Lakshmy regarding foreign workers policy in Malaysia, Saravanan explained the Act 446 Employees’ Minimum Standards of Housing, Accommodation and Amenities Act 1990, and current initiatives taken by Human Resource Ministry for the well being of foreign and local employees.

The initiative explained by him are such as Working for Workers Application which helps the employees to voice out their concerns about the employers, the soon to be implemented E-Wages system which will ensure employees’ salaries are paid before the seventh of each month as stipulated under the Employment Act 1955.

The live session was streamed from 8.30 p.m. until 9.30 p.m. in Lakshmy Ramakrishnan’s offcial YouTube channel and was participated by Datuk Seri M Saravanan and the victim Velayutham.- The Capital Post