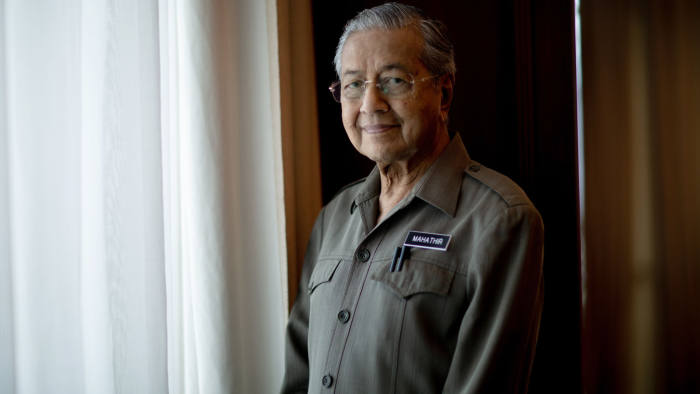 Malaysia has rejected an offer from Goldman Sachs of “less than $2bn” in compensation over the 1MDB scandal as the country’s prime minister sticks to his demand for $7.5bn.

“Goldman Sachs has offered something like less than $2bn,” Mahathir Mohamad told the Financial Times in an interview on Friday. “We are not satisfied with that amount so we are still talking to them . . . If they respond reasonably we might not insist on getting that $7.5bn,” he added, without elaborating.

Mr Mahathir said the government had also contacted Deutsche Bank and UBS over their dealings with 1MDB, the state investment fund at the centre of one of the biggest alleged frauds in the nation’s history.

The fund’s losses from the alleged bribery and corruption scheme helped topple the government of Najib Razak last year and return the 94-year-old Mr Mahathir to power.

Goldman helped 1MDB, founded by Mr Najib, to raise $6.5bn in bonds. Malaysia has accused two former Goldman bankers of bribing officials to secure the bank’s involvement in the bond issues, from which it allegedly earned $600m in fees.

Malaysia has demanded the $7.5bn in compensation from Goldman for ensuing losses. Goldman declined to comment.

The amount [JhoLow embezzled from 1MDB] is much bigger. If he had the full amount we would be very happy . . . We are still going after the rest of the money – Mahathir Mohamad

Malaysia is also trying to recoup $1bn from a settlement that Jho Low, the Malaysian financier allegedly at the heart of the 1MDB scandal, struck on Wednesday with the US Department of Justice.

“The amount [Mr Low embezzled from 1MDB] is much bigger,” said Mr Mahathir. “If he had the full amount we would be very happy . . . We are still going after the rest of the money.

“The DoJ has indicated that, if we can prove claim of ownership, then we will be able to get the money for ourselves.” Mr Mahathir said Malaysia was not negotiating, or in contact, with Mr Low, who admitted no guilt in the DoJ settlement. He was indicted in the US last year and still faces criminal prosecution for his alleged role in the looting of 1MDB. He has denied any wrongdoing.

The prime minister said he was not aware of the financier’s whereabouts. “He’s not staying in any one place.”

Abdul Hamid Bador, Malaysia’s police chief, told local media on Friday that he knew Mr Low’s location — reiterating a statement he gave in September — and dismissed reports that the financier was in the United Arab Emirates.

Mr Mahathir said Malaysia was in contact with multiple banks about trying to identify funds belonging to 1MDB and prove that they were the property of his government.

As part of the investigation, the Malaysian attorney-general’s office was in contact with UBS, which was reprimanded by the Swiss regulator two years ago for 1MDB-related transactions.

The attorney-general was also speaking to Deutsche Bank, which faces investigation in the US over whether it violated money laundering or foreign bribery act laws in the course of raising $1.2bn for 1MDB in 2014.

“The attorney-general has been talking to other banks as well. I think Deutsche Bank was mentioned and UBS,” Mr Mahathir said. Deutsche Bank and UBS declined to comment. – Financial Times