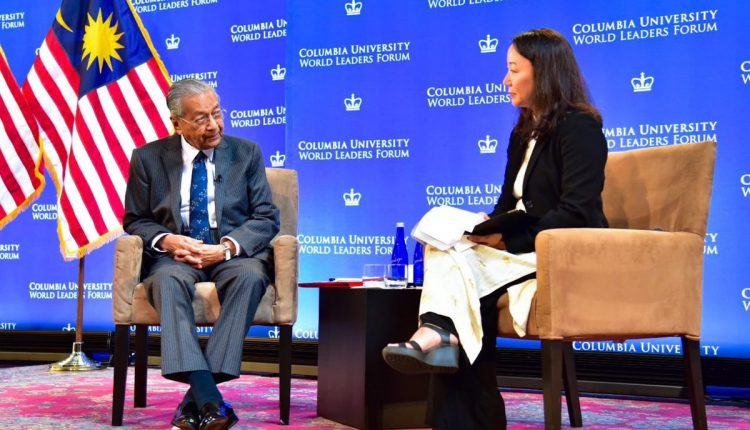 NEW YORK,  — The biggest threat to multilateralism is unilateralism that happens when powerful countries opt to do things their own way, according to Malaysian Prime Minister Tun Dr Mahathir Mohamad.

He said that in these instances, such countries would not consider the feelings or the thinking of other countries.

“But because of their strength they decide to make decisions and do things on their own – in their own interest without due regard to others who are affected by whatever it is that they do,” he said.

Dr Mahathir, who is in town for the 74th Session of the United Nations General Assembly, said this at the World Leaders Forum at the Columbia University here on Wednesday. On how multilaterism worked for Malaysia, the prime minister pointed out that the country had always believed in solving things through negotiation, arbitration or the court of law.

“If we had espoused unilateralism, we would have solved problems through confrontation and even war. But we’ve never done that. Instead we have negotiated with our neighbours,” Dr Mahathir said.

He noted that power sharing among the various races to rule the country also constituted multilateralism in the case of Malaysia.

Dr Mahathir observed that the world today had become so interconnected and smaller, with what countries do would affect other countries.

“So multilateralism is something that’s unavoidable now. Acknowledging that, Malaysia which has been a trading nation for a long time, decides that the bigger world would become a bigger market. Now we have the whole world as a market.

“Because the whole world has become a market, it’s important that all the countries of the world remain at peace and stable and are able to become a trading partner for us,” he said.

Dr Mahathir underscored that any attempt to stop trade or to apply sanctions and so on would have negative repercussions.

When sanctions were applied, he said, it meant that not only the country chosen to be sanctioned suffered because of its inability to trade but other nations too suffered because they could not trade with it.The prime minister reckoned this would not contribute towards the well-being or wealth creation in this world.

“So we’re all for multilateralism but of course there should be certain rules that must govern whatever it is that we do, but those rules should not restrict trade but promote more trade,” he added. — BERNAMA