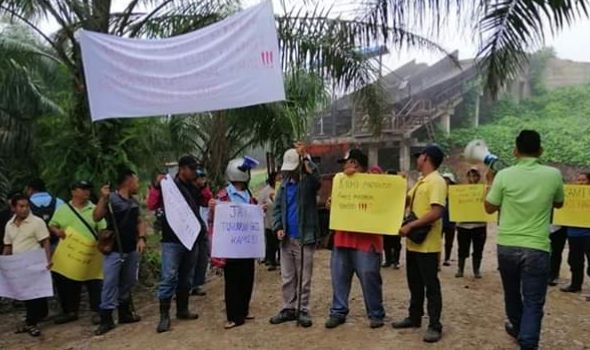 KANOWIT: Some 40 workers of an oil palm estate in Ranan, near here staged a demonstration demanding better salary and payment for overtime work.

Kanowit OCPD Deputy Supt Tega Bilong said the workers held their demonstration on Thursday (Nov 14) morning as they felt there was no improvement in pay for overtime work since October.

“The motive of the demonstration was for the affected workers to claim their rights to allowances and incentives,” he said.

Supt Tega said among the claims were for the company to pay October’s overtime of RM698.28 to security workers who deserved it within three days.

The field workers and fresh fruit bunch (FFB) checkers also wanted overtime pay to be increased from RM35.38 to RM42.31, besides claiming for a hike in incentive for every tonne of palm oil harvested.

Workers, who had retired, also demanded a one-off golden hand-shake incentive that had been agreed upon earlier by the company. They wanted it to be paid within three days.

“The general workers of the plantation also requested that they be paid on a daily basis instead of on piece-meal basis based on the contract,” he said.

The demonstrators set the security post of the plantation on fire in a show of protest.

“We had to rush to the scene to calm down the situation involving the workers and the company,” he said.

Officers from the Labour Department were also there to discuss the issues with the company.

Supt Tega said a video clip of the demonstration was spread on social media.

He advised members of the public not to fan the issue so as to avoid any untoward incident from happening.

He said the police had received two reports lodged by the manager of the plantation concerning the demonstration and the burning of the security post. -The Star