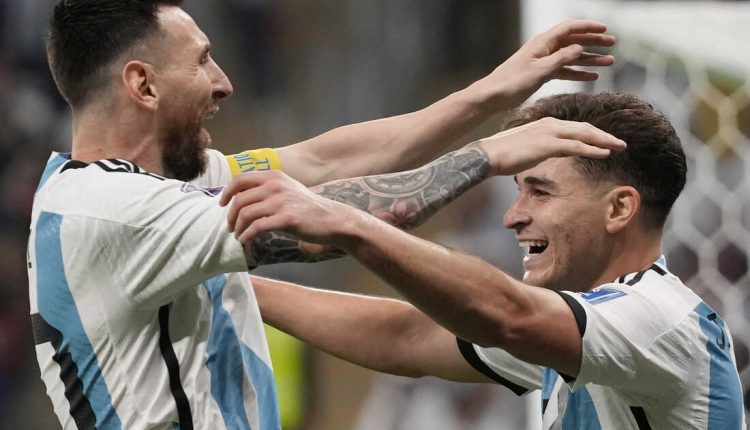 LUSAIL, Qatar (Reuters) -The most clinical of smash-and-grabs kept Lionel Messi on track for his date with destiny and broke Croatian hearts as Argentina reached Sunday’s World Cup final with a 3-0 victory at the Lusail Stadium.

Either France or Morocco will face Argentina who were fired-up and orchestrated by a majestic Messi on Tuesday. Considered by many to be the world’s best, Messi now has a chance to put behind him defeat in the 2014 World Cup final and fill the only blank on his career resume.

“Throughout the World Cup it has been incredible what we have experienced. We are going to play the final which is what we wanted,” said Messi, voted the world’s best player a record seven times.

“I don’t know if it’s my best World Cup, it’s been a long time I’ve been enjoying. This team is crazy. We are going to play one more final, we are going to enjoy all of this.”

Croatia played their part, but in the event it was the smallest of cameos.

Their big day had been, it transpired, against Brazil in the quarter-finals where they contained the pre-tournament favourites and had snuck through on penalties.

The same gameplan they had used to confound the Brazilians, never worked against Argentina. Croatia’s tightly-controlled possession play was on Tuesday night a little more loose, a little more ragged.

Tired legs will do that.

So, for all their greater possession and early domination, Croatia went in at halftime 2-0 down thanks to two classic sucker-punches from their South American opponents.

The intricate play and tight triangles Croatia were attempting only had to falter in a tiny way, and when they did Argentina were ready to pounce.

It was a cruel irony that, having looked the stronger side for the best part of half an hour, it was Croatia’s inspirational playmaker Luka Modric who lost possession and let Argentina in.

Julian Alvarez was sent clean through on the end of a route-one pass. Ears back he sprinted towards the goal – almost as fast as the spider-cam fizzing along a wire tracking his run from the roof of the stadium – and chipped Dominik Livakovic, before being flattened by the goalkeeper.

There had seemed little Livakovic could have done to avoid clattering the striker, but referee Daniele Orsato pointed straight to the spot, booked Livakovic and also Mateo Kovacic for complaining before Messi strode to the penalty spot.

Seconds later the net bulged and a packed Lusail stadium was throbbing with deafening roars as Argentina’s players mobbed their captain.

Already rocked, worse was to come for Croatia five minutes later when, after a similar pattern of losing possession Alvarez broke free again. Two attempted tackles only saw the ball bobble off Alvarez and on he went, before poking the ball past Livakovic to double Argentina’s lead.

Argentina seemed faster and hungrier and added to their lead after another breakaway in the 70th minute, this time by Messi.

He careered down the right and twisted defender Josko Gvardiol left and right before screeching to a halt and laying the ball back from the byline to Alvarez who calmly slotted home from close range for a third to signal euphoria in the blue and white end of the ground, euphoria which continued until the full-time whistle and beyond.

“We knew Croatia would have possession but we had strength to recover the ball. They were not tidy in possession,” Messi said.

“We are not lost on the pitch, we know what to do in every moment of the game. That’s why we were not desperate in this match when we had to run from one side to another.

“We have gone through some tough situations, some very good ones. Today we are experiencing something spectacular.

“I’m enjoying it with all these people and with all the Argentinians who are in our country. I imagine it must be crazy.– The Star