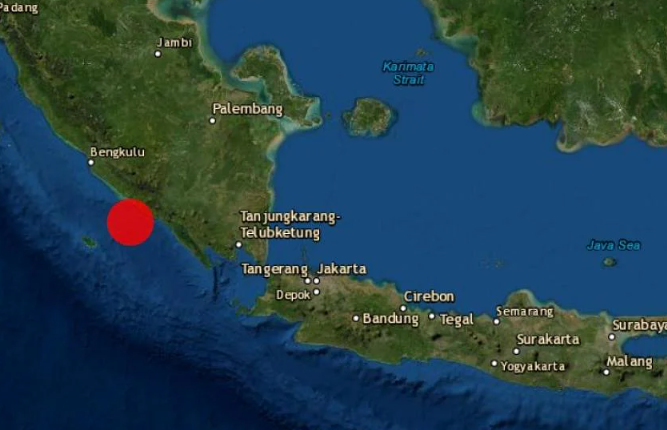 JAKARTA (AFP): A 6.0-magnitude earthquake hit off the coast of Indonesia late Tuesday (Aug 23), according to the US Geological Survey, sending people fleeing their homes but with no casualties or damage immediately reported.

The shallow quake occurred in the waters off the southwestern coast of Sumatra island, at around 9:30pm (1430 GMT) — nearest to Bengkulu, South Sumatra and Lampung provinces.

It sent people in South Sumatra and Bengkulu rushing from their homes, according to local media and witnesses contacted by AFP.

However no casualties or damages were immediately reported by authorities, and USGS estimated that there would be little chance of damage on the ground in Sumatra island. No tsunami threat was issued.

But the Indonesian Meteorology and Geophysics Agency (BKMG) advised residents to “watch out for possible aftershocks”.

It classified it as a 6.5-magnitude quake, and said its epicentre was in the sea about 64km from shore.

Indonesia sits on the Pacific “Ring of Fire”, causing it to experience frequent earthquakes.

The last major quake that hit the country was in March, when a 6.7-magnitude quake hit off Sumatra island’s west coast. Residents of North Sumatra’s Nias and Hibala islands reported being shaken awake by the tremors.

It was followed by a series of strong aftershocks.

That February quake had a depth of 12km, heaving damage upon homes and buildings, including mosques, schools and banks, and pushing authorities to evacuate more than 6,000 people.

In 2004, a 9.1-magnitude quake struck the coast of Sumatra and triggered a tsunami that killed 220,000 people throughout the region, including about 170,000 in Indonesia.-The Star