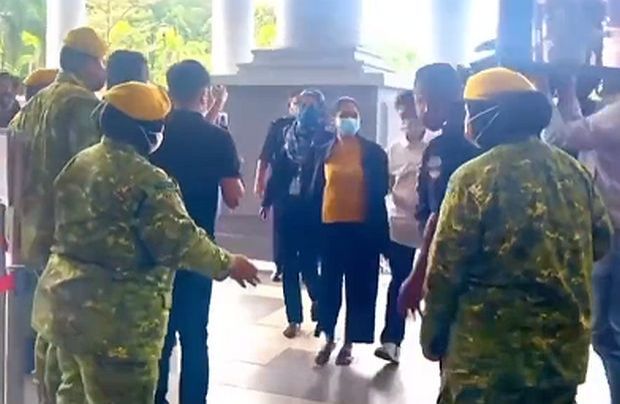 KUALA LUMPUR: The woman who pulled off an indecent act while performing at a comedy club’s open mic night has been charged in court on Wednesday (July 13).

The accused, Nuramira Abdullah, 26, has pleaded not guilty.

According to the charge sheet, Nuramira was accused of insulting Islam by admitting she is Muslim and remembered 15 verses of Al-Quran before took off her baju kurung at at restaurant Crackhouse Comedy Club at Taman Tun Dr Ismail on June 4.

Nuramira was charged under Section 298A of the Penal Code for causing disharmony, disunity, or feelings of enmity, hatred or ill will, or prejudicing the maintenance of harmony or unity, on grounds of religion.

She is facing maximum five years imprisonment, upon conviction.

Clad in a yellow blouse and black pants, Nuramira earlier arrived around 9am before being brought to the courtroom in handcuffs.

The court set RM20,000 bail with one surety and the accused need to surrender her passport until the disposal of the case.

The court fixed Aug 18 for mention.

Last weekend, a 54-second video circulated on social media showing a woman claiming to have memorised 15 juz of the Quran and then discarding her tudung and baju kurung, leaving her in low-cut top and short skirt.

The video was of a performance during an open-mic night at the Crackhouse Comedy Club in TTDI.-The Star