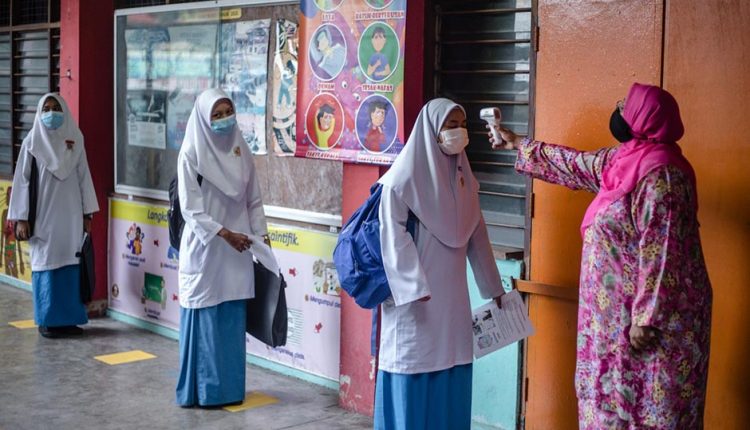 KUALA LUMPUR, Sept 21 — The reopening of schools in stages nationwide starting Oct 3, based on the phase of the National Recovery Plan (NRP) each state is in, will hopefully put to rest issues that have been plaguing teachers, students and parents since the start of the Covid-19 pandemic in March last year.

The implementation of the home-based teaching and learning (PdPR) programme since last year has not exactly been smooth due to the rural-urban digital divide and the lack of smartphones and laptops among the economically disadvantaged communities.

Many teachers and parents are relieved at the government’s decision to reopen schools gradually as the move would help to reduce the fatigue and loss of motivation experienced by many students which, they feel, is at a worrying level.

Some parents, however, have aired their concerns over their children returning to school in view of the relatively high number of new Covid-19 cases reported daily nationwide and the vaccination programme for children aged between 12 and 17 yet to be completed.

But they agreed that efforts have to be made to get the ball rolling to reopen all schools and educational institutions and ensure the smooth running of the nation’s education system.

Last week, Education Minister Datuk Radzi Jidin announced that schools will reopen in stages from Oct 3, with students taking turns to attend school and attendance set at 50 per cent of the classroom capacity to reduce Covid-19 transmission risk.

Schools in states under Phase One of NRP, however, will remain closed and their students will continue with the PdPR sessions.

In Phase Three states, preschools and private kindergartens are also allowed to reopen and their pupils can attend without rotation. As for secondary schools, full boarding school students sitting for public examinations can attend school without rotation; daily or private school students sitting for public examinations are also allowed to return to school but rotation is necessary.

In Phase Four states, primary school pupils in Years One to Three can attend school on a rotational basis from Oct 17 onwards. Years Four, Five and Six pupils will do the same, also on rotation, from Oct 31.

Nur Sabrina Mansor, 30, a remedial teacher at Sekolah Kebangsaan (SK) Seksyen 27(2) Shah Alam, Selangor, is happy that schools will reopen in stages, adding that she cannot wait to conduct face-to-face teaching and learning (PdP) which, according to her, is the best approach.

Nur Sabrina, who specialises in teaching pupils who are academically backward, said the PdPR classes have made it difficult for her to monitor her pupils’ progress and development.

“For the pupils I teach, face-to-face sessions are the best as I can monitor each one of them and guide them accordingly.

“Although there are concerns over the reopening of schools due to the high number of (Covid-19) cases being reported daily, there’s ample time for schools to make the necessary preparations to comply with the SOPs (standard operating procedures) set by the government,” she told Bernama.

History teacher Nor Amirah Abdul Hamid, 31, is also eager to return to school.

Nor Amirah, who teaches at SK Dr Sulaiman in Tampin, Negeri Sembilan, said one of the biggest challenges of PdPR is ensuring full attendance of her pupils.

Despite the setbacks, the online teaching and learning programme has enabled many teachers to be Internet savvy, she said.

“I have now even learned to prepare interactive slides to draw the attention of my pupils,” she added.

Meanwhile, Ahmad Qhuffry Hazlan, 36, who lives in Labuan – which is under Phase Four of NRP – said he is not sure if he should send his children Ahmad Qhaliff Imran, 12, and Ahmad Qhayyum Zaquan, nine, to school.

He said he is worried about the risk of infection although the pandemic is well under control in Labuan.

“My concern is whether the teachers can control the primary school pupils and make sure they comply with the SOPs.

“But I’m also worried about my children following PdPR sessions for too long because they tend to get distracted. Apart from that, the Internet network in Labuan is not that efficient, which makes it difficult for my children to follow the online classes,” he added.

Give priority to examination classes

Academics, meanwhile, were of the opinion that schools should only be reopened for students taking public examinations such as STPM and Sijil Pelajaran Malaysia (SPM).

Associate Prof Dr Azlin Norhaini Mansor, who is chairman of the Centre for Leadership and Education Policy Studies at the Faculty of Education, Universiti Kebangsaan Malaysia (UKM), felt that for now only upper secondary students should be allowed to return to school.

She said lower secondary students should continue with their PdPR sessions until the pandemic is brought under control or at least 90 per cent of eligible Malaysians have received two doses of the Covid-19 vaccine.

As for primary school pupils, she said it would be more appropriate for Year Four to Year Six pupils to return to school and the rest to continue with PdPR.

She felt that this is a better option than getting the students to attend school on a rotation basis because it may be difficult for every school to implement this as not all of them have adequate, complete and functional infrastructure and facilities to do so.

“For parents, confusion and difficulties are bound to arise in terms of childcare when the rotation system is implemented. This is particularly true in the case of parents with several schoolgoing children as they have to keep track of those who are going to school and those staying at home,” said Azlin Norhaini.

She suggested that the Ministry of Education be more flexible in the school reopening process by taking into consideration the views of headmasters and principals who have a better understanding of the situation in their respective schools, particularly in terms of the preparedness of teachers and availability of resources and information technology infrastructure.

Dr Anuar Ahmad, a lecturer at UKM’s Centre for Community Education and Well-being, said allowing unvaccinated children to return to school may put them at risk of infection.

He said in Texas in the United States, massive Covid-19 outbreaks forced schools to close last month after they reopened for several weeks.

“Besides the risk of infection, the rotation system will be a burden for teachers because they will be forced to teach the same things twice,” he said.

Anuar suggested that the rotation system be implemented for levels that are easier for the teachers to handle, as well as monitor SOP compliance.

He also observed that the teachers’ ability to conduct PdPR sessions has improved greatly compared to their performance at the start of the implementation of digital learning.

He said this was evident in the achievements of students who sat for SPM 2020 and the Malaysian Education Development Plan 2013-2025’s Annual Report for 2020.

“One of the things that have to be considered is how many students and staff members have to be vaccinated before a school is considered safe. If 30 per cent of them are vaccinated, will it be safe (for students to return to school)?” he asked. -BERNAMA -BH