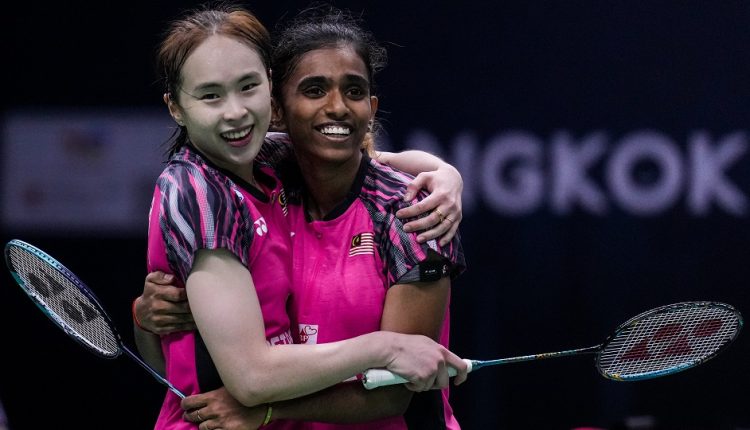 PETALING JAYA: Women doubles pair Pearly Tan-M. Thinaah can walk tall despite losing in the second round of the Denmark Open.

Pearly, who is playing in only her first tournament after recovering from a hamstring pull, hardly showed her lack of preparation when she and partner Thinaah stole one game from reigning world champions Chen Qingchen-Jia Yifan of China before losing 18-21, 22-20, 17-21 in Odense yesterday.

The world No. 11 played their hearts out and could have caused the biggest upset of the day but some minor errors saw them losing out narrowly to the top seeds.

Pearly, whose progress was hampered after a hamstring injury during the Japan Open in August, rued that errors made during the important points had proved costly.

“I really enjoyed playing against the Chinese pair but we made some clumsy mistakes during the crucial points. So, we need to improve on this,” said Pearly.

“I also feel that I need to improve my skills at the front of the court. I think this might make a difference.”

Pearly-Thinaah will now turn their attentions to the French Open in Paris next week.

There was no problem for men’s doubles world champions Aaron Chia-Soh Wooi Yik yesterday when they blew away Lucas Corvee-Ronan Labar of France 21-13, 21-18 in the second round.

World No. 4 Aaron-Wooi Yik were involved in a epic battle with the world No. 8 Indians in the semi-finals of the World Championships in August where the Malaysians had prevailed 20-22, 21-18, 21-16.

The victory had proved pivotal for the Malaysians as they had gone on to capture the world title.

It had also preserved Aaron-Wooi Yik’s unbeaten record against Satwiksairaj-Chirag as they have come out on top in all six of their past encounters.

“This will definitely be a tough match. We need to prepare very well,” said Bin Shen.

Independent shuttlers Ong Yew Sin-Teo Ee Yi could join Aaron-Wooi Yik in the last eight but they must beat China’s Liu Yuchen-Ou Xuan Yi in the second round.

World No. 13 Soon Huat-Shevon have a tough task in the last eight today against Japan’s world No. 2 Yuta Watanabe-Arisa Higashino.

In the men’s singles, world No. 3 Lee Zii Jia marched into the quarter-finals with a 21-5, 21-19 win over Japan’s Kanta Tsuneyama to set up a match against world No. 7 Jonatan Christie of Indonesia next.–The Star