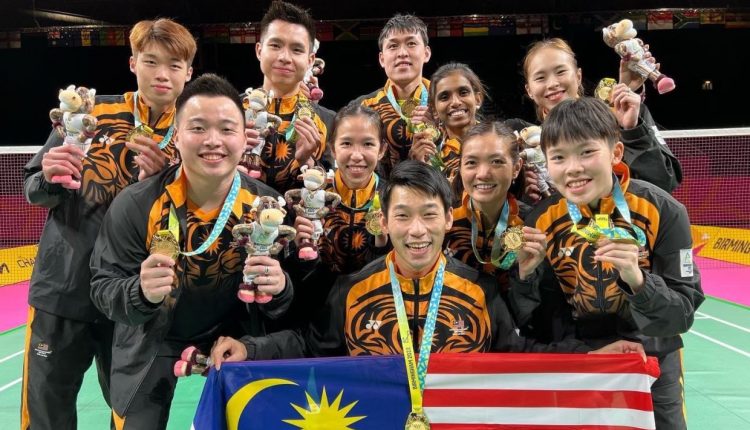 PETALING JAYA: It was one of the greatest battles in recent times.

Malaysia put up a valiant performance for almost four hours to regain the Commonwealth Games mixed team gold medal after dethroning defending champions India 3-1 in the final at the National Exhibition Centre on Wednesday (August 3).

It was a sweet revenge for the team after losing out to the Indians in the final of the 2018 Gold Coast Games and was also a soothing consolation in a way after the men’s loss to India in the quarter-finals of the Thomas Cup Finals in May.

Yesterday, Aaron Chia-Soh Wooi Yik were on fire as they destroyed Satwiksairaj Rankireddy-Chirag Shetty 21-18, 21-15 to give the team a flying start in the men’s doubles.

It was the Indians who surged ahead to take a 18-15 lead but the world No. 6 stepped on the gas to produce quality shots to win six points in a row before taking the opener.

The demoralised Indians could not lift their game after that to counter Aaron-Wooi Yik who were just one step ahead in every department and deservedly trooped out as the winners.

The strong start must have rubbed off on Goh Jin Wei as the spirited shuttler gave former world champion P.V. Sindhu a rude shock before losing narrowly 20-22, 17-21.

Jin Wei had held Sindhu by the jugular but experience saw the world No. 7 digging deep to pull through and level the tie at 1-1.

Ng Tze Yong was least expected to deliver but the last minute replacement for Lee Zii Jia turned hero after taking down seasoned campaigner K. Srikanth in the men’s singles.

All had expected Srikanth to crush the young debutant but Tze Yong surprised his opponent with superb attacking and solid defence to match his opponent all the way until he wore the former world No. 1 out.

Srikanth was the team’s hero at the last Games when he upstaged Lee Chong Wei in the mixed team.

It was down to women’s doubles pair Pearly Tan-M. Thinaah to deliver the winning point and they did not disappoint by overcoming Tressa Jolly-Gayathri Gopichand 21-18, 21-17.

“We are glad to contribute the winning point. The feeling is undescribable. We are proud of the team,” said debutant Thinaah after the victory.–The Star

‘We come in friendship to Taiwan, peace to the region’, says Pelosi